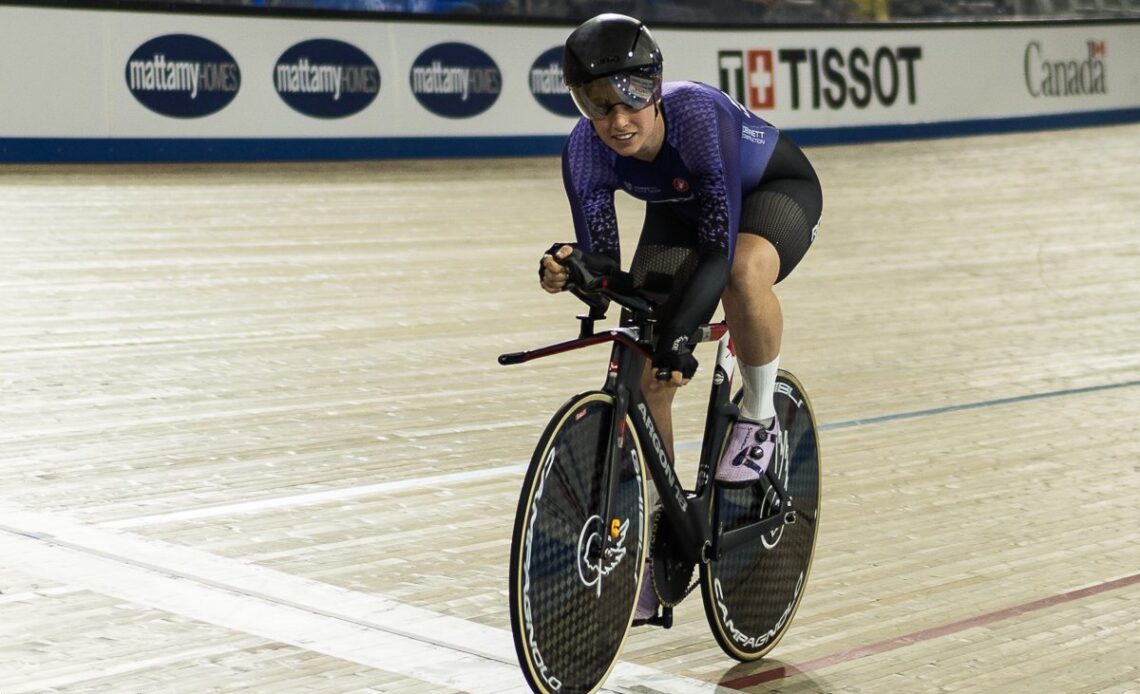 Sunday was the last day of competition at the 2023 Canadian national track championships in Milton, Ontario’s Mattamy National Cycling Centre. Laurianne Genest added another gold to the two she earned on Friday and Saturday, James Hedgecock also nabbed a third championship, and Ariane Bonhomme raced to two titles.

Bonhomme (Roxo Racing) qualified with the fastest time in the women’s 3-km pursuit, stopping the clock at 51.439. Fiona Majendie, Erin Atwell and Ruby West all made it to the final as well. There, Bonhomme beat Majendie by nearly 8 seconds. In the bronze matchup, Atwell nearly caught West but then sputtered out.

Toronto Hustle’s Michael Foley was the speediest of the men over 4 km. Foley qualified with Dylan Bibic, Carson Mattern and Mathias Guillemette, before taking Bibic in the final.

Lauriane Genest (Equipe du Quebec) seized another gold, this one in the women’s keirin, beating Sarah Orban (Watt Riot Cycling) for the top honours. Diane Snobelen rounded out the podium.

Similar to Genest taking gold in both the individual sprint and the keirin, Team Ontario’s sprint national champion James Hedgecock was the fastest after following the derny in the men’s keirin final. Tyler Rorke earned another medal coming in second and the bronze belonged to Nick Wammes.

The final events of the 2023 championships were the hand-slinging madison races. Six duos went at it in the women’s madison over 80 laps or 20 km. It was a close contest between Bonhomme and Lily Plante of Roxo Racing and Atwell and Devaney Collier of Team Affiliate, with Roxo prevailing by 3 points.

Seven twosomes took on the men’s madison, with the Bibic-Guillemette duo looking like the one to beat. Both clad in their snazzy UCI Champions League duds, they dominated on their way to gold, with Evan Burtnik and Chris Ernst of Toronto Hustle silver and Equipe du Quebec third.