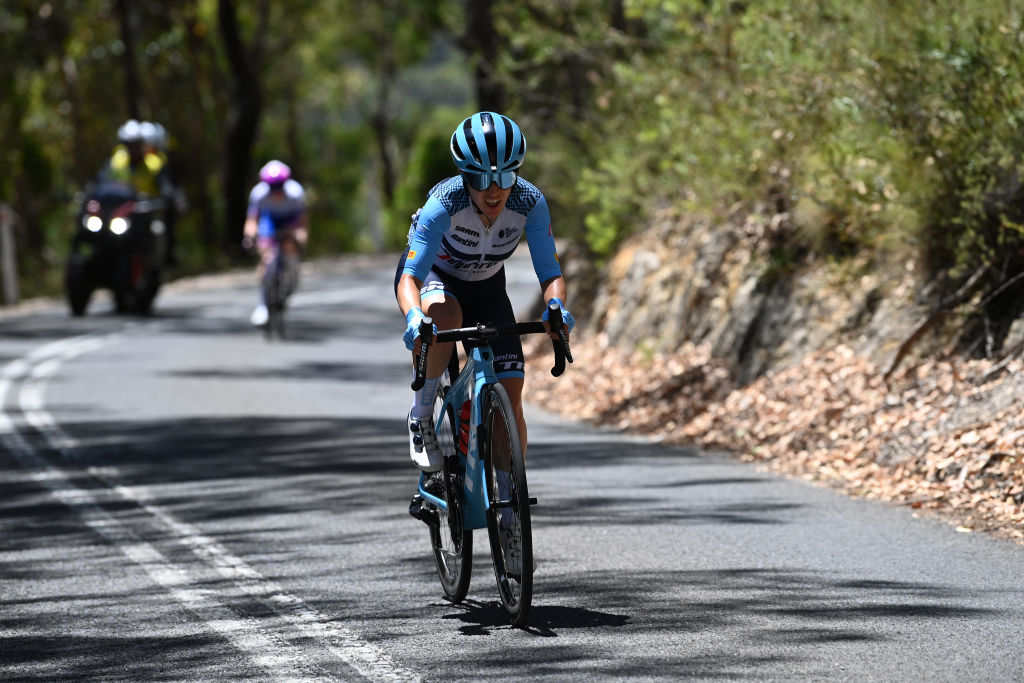 Stage 2 of the women’s Santos Tour Down Under was always one where the riders chasing GC were going to be on high alert, with the climb of Mount Lofty just 10km before the end. Although it wasn’t hard enough or long enough by itself to pull out huge gaps, three-time race winner Amanda Spratt was still determined to take full advantage, knowing all too well that, in this three-day tour, every opportunity counts.

The first stage was one for the sprinters, leaving just the 90km stage 2 and the 93.2km stage 3 with the Corkscrew climb to shape the general classification. As good as Spratt’s climbing legs now look to be again – after a tough two years where she struggled with Iliac artery endofibrosis and the recovery from it – she wasn’t waiting for the final stage to try to chase a fourth title with her new Trek-Segafredo team, who ramped up the pace after the final intermediate sprint in Summertown with 15km to go.

“I said to the girls that I felt amazing today and this is the plan, ‘I want to go full gas after that sprint’ and they really set it up super well,” Spratt told reporters on the sidelines of a hot stage on Monday. “I knew as soon as we got in to the steepest bits (on the Mount Lofty climb), that’s where I wanted to go – we didn’t die wondering, put it that way.”

On the climb of Mount Lofty, Spratt’s teammate Brodie Chapman, wearing the jersey of the Australian champion, took the final turn at the front, setting a ferocious pace. Then Spratt launched with a stinging punch and noone could follow, so the gap was quickly established, but now she had to hold it through the descent. But as the crowd lining the barriers strained to see the first rider round the final bend, the chase was closing in.

“There were just a few too many riders left in that chase group and they got pretty organised pretty quickly and I kept believing all the way to the finish but it was just 500m too long for me,” said Spratt.

Alex Manly (Jayco-AlUla) won the stage and stepped into the ochre jersey of the race leader, with Georgia Williams (EF Education-TIBCO-SVB) in second and Nina Buijsman (Human Powered Health) stepping in to third. Spratt took tenth, holding onto the chase once caught to finish on the same time as Manly for the stage, but with bonus seconds coming into play – from both stage 1 and stage 2 – Spratt is now fifth overall with a 14 second gap to close.

“If anything we can gain a lot of confidence today from the way we raced,…