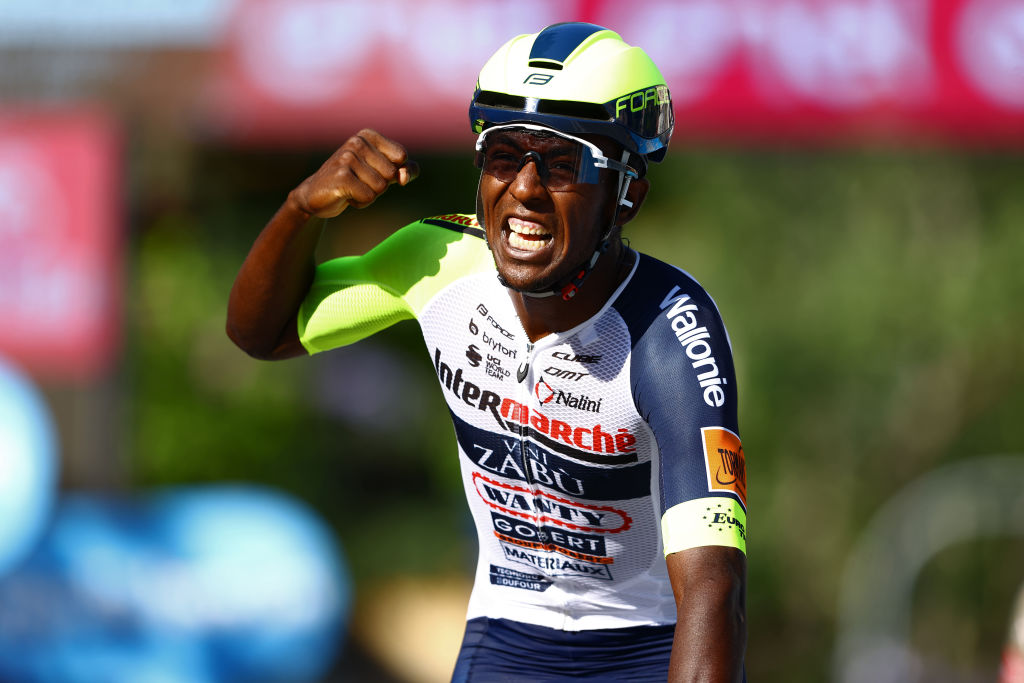 Biniam Girmay has been voted African Cyclist of the Year for the third time in succession after a season that saw him claim a historic victory at Gent-Wevelgem and a stage win at the Giro d’Italia.

The Eritrean was one of the peloton’s outstanding performers in what was his first full season at WorldTour level. Girmay joined Intermarché-Wanty-Gobert in June of last year after a mid-season transfer from Delko.

Girmay is the first rider to be named African Cyclist of the Year three times. He finished ahead of his Intermarché-Wanty-Gobert teammate Louis Meintjes in this year’s voting, while his fellow Eritrean Natnael Tesfatsion, who joins Trek-Segafredo in 2023, placed third.

“As for the first two trophies, I feel an immense pride,” Girmay said.

“As I said, my victories at Gent-Wevelgem and the Giro d’Italia were also victories for the African continent. I still find it hard to realise, to understand what I achieved in 2022. This new trophy crowns my season.”

In 2021, Girmay became the first Black African to win a medal at the road World Championships when he sprinted to second in the under-23 road race, and he delivered on that potential at the highest level this season.

The 22-year-old signalled his intentions with an early win at the Trofeo Alcudia and strong displays at Paris-Nice and the E3 Saxo Bank Classic, but he scored an historic victory at Gent-Wevelgem, where he won a four-man sprint ahead of Christophe Laporte.

Girmay had originally been scheduled to race La Roue Tourangelle that afternoon and he resisted pressure to make his Tour of Flanders debut a week later, preferring to make an already planned trip home to Eritrea.

“It was three months since I had seen my wife and daughter, it was out of the question for me to change my programme,” Girmay told L’Équipe Magazine last week after the French weekly magazine visited at him in Eritrea.

“Afterwards, I would have been asked to stay on for Paris-Roubaix too and it would never have finished.”

Girmay instead availed of the time at home in Asmara to train at altitude ahead of his Grand Tour debut at the Giro, where he placed second to Mathieu van der Poel in the uphill sprint at Visegard on the opening day.

The pair continued to duel through the opening half of the Giro, most notably on the breathless stage around Naples, where Girmay placed fifth.

Girmay finally got his reward when he outsprinted Van der Poel to win stage 10 in Jesi, though he would be forced to abandon…