Bouncing back from disappointment at Baal, Van Aert wins Koksijde’s sandy X2O Trofee round at a canter 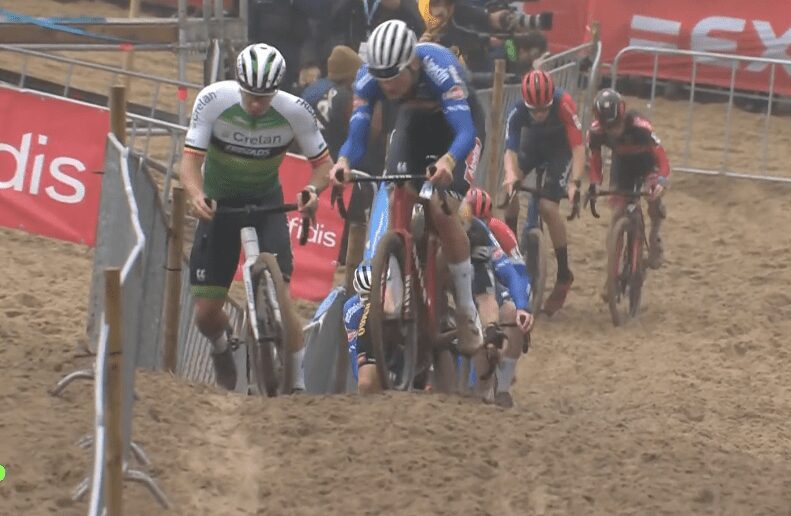 Wout Van Aert was thwarted on Tuesday by a flat tire in the fourth round of the X2O Badkamers Trofee, but on Thursday he bounced back with a fifth round victory over his rival Mathieu van der Poel in the sand of Koksijde. It wasn’t even close as Van Aert prevailed by 1:38. Eli Iserbyt added eight seconds to his series overall lead.

Iserbyt has come roaring back in the new year, winning the Baal round before third in Herentals put him on the top of the standings 1:28 over round one victor Lars van der Haar at the start of the day.

On Lap 1 van der Poel’s teammate Toon Vandebosche led the string through the first sand section. Laurens Sweeck skipped away. A big dig from van der Poel in the sand put him at the front. Sweeck and Van Aert followed him over the line.

The second circuit saw van der Poel with a gap over Van Aert in the first half. But Van Aert rejoined him. Sweeck made it a trio as the rain tilted down.

Sweeck tried to dash clear on Lap 3 of 8, but he was brought to heel. Iserbyt tried to put van der Haar in his rear view mirror by this circuit.

On Lap 4 Sweeck fought to stay in contact and failed. Having snatched a new bike with different tires, Van Aert took his leave of his great Dutch rival, finishing the lap 18 seconds clear, much to the delight of the Belgian fans. Van der Haar dropped Iserbyt.

Van Aert carried on solo on Lap 5. Van der Poel would say after the race that his back was bad on Thursday.

When American Ben Frederick went over the handlebars in the sand, he made a beautiful roll and then got up and bowed to the crowd.

Van Aert galloped home unpressured. Iserbyt brought van der Haar back and beat him by eight seconds, which means that he leads the GC by 1:36.

The sixth round is January 28 in Hamme.