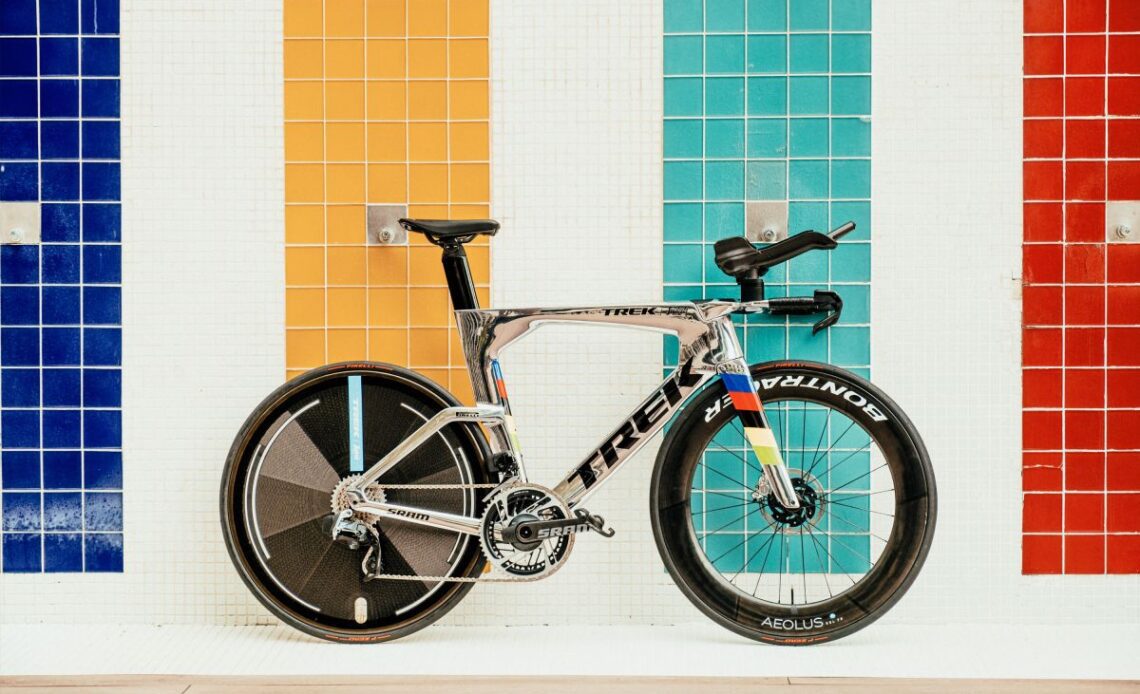 It’s not uncommon for successful riders to receive a custom bike to commemorate their victories. In fact, nowadays, it’s almost more uncommon for them not to. It’s a great way for sponsors to congratulate the rider and a nice celebration of their victory.

More importantly, it’s also a marketing department’s dream. It allows the brand to really draw attention to the fact that its very own bike was ridden to the highest honours in the sport.

Naturally, whatever the victory being celebrated, the brand wants the custom bike to stand out in a crowd, but when that celebration is in relation to two of the biggest wins available in time trialling – the world championships and the hour record – a brand will want to pull out all the stops. That’s exactly what Trek has done for Ellen van Dijk, who took those very honours in 2022.

There has to be some consideration of the appropriateness of the design, of course. For a world champ, the blue-red-black-yellow-green of the rainbow bands must feature, but exactly how, where, and among which other colours is limited only by the imagination of the designer.

Credit where credit is due because whoever Trek asked to design this Speed Concept, they’ve played a blinder; there’s no denying it will stand out in a crowd.

Chrome finish aside, the bike’s spec is equally premium, with top tier components dressing the bike from top to bottom.

The groupset is courtesy of Sram, with the Red eTap AXS groupset. Up front, a 56/43 chainset is paired with what looks to be a 10-33T cassette. This makes for a huge maximum gear, equivalent to a 61 x 11, while maintaining enough range to handle the hillier terrain found near to the team’s training camp in Alicante.

Wheels come courtesy of Trek’s subsidiary, Bontrager… sort of. The front is cut and dry; it’s a Bontrager Aeolus RSL 75. The rear is a little more complex; it’s marked up with Trek Segafredo branding, as per the team name, however, Trek – nor Bontrager – makes a disc rear wheel, and as such, it’s actually a Zipp wheel with the logos removed. This has been the case for the team for a number of years.

If you look closely, you can see the outline of the Zipp wordmark circling the cassette.

Both wheels are shod with Pirelli P Zero Race tyres, and differences continue here. The front is using a black valve, suggesting the tyre is set up with inner tubes, specifically the…