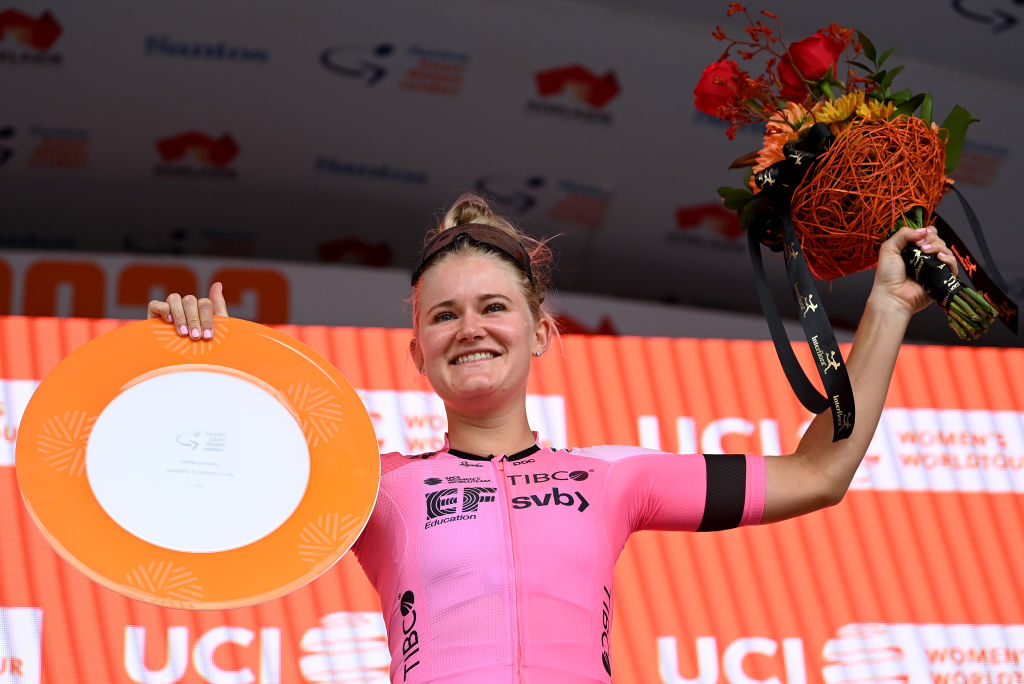 This time last year Georgia Williams was keeping her options open with a one-year contract and discussing that at times, particularly because of injury, she had contemplated whether it might be time to retire but now she has started 2023 as a rider that looks anything but ready to say goodbye to her cycling career.

A new team and, it seems a new lease of life for the 29-year-old. In her first race with EF Education-Tibco-SVB, the Santos Tour Down Under, she twice stepped onto the stage podiums, with a second and third, as well as taking third place on the General Classification. In her eleventh season, and in just one race, she amassed three of her best-ever Women’s WorldTour results, leaving the rider herself the most surprised of all.

“I can’t believe this. I was not expecting this when I came over here,” said the 29-year-old after stepping up to her first Women’s WorldTour GC podium.

“Such a good start, I can’t ask for anything more,” said Williams. “Third to Amanda Spratt and Grace Brown – that’s a dream. Super good start for the team, just shows how strong we are and first race together, we already work so well together.”

The rider from New Zealand had come into the race with an inkling she was in good shape but wasn’t sure she’d be the rider searching for results. Indeed she wasn’t the only rider in her team looking for a high place in the GC, which was proven in the results. Williams teammate Krista Doebel-Hickok came fifth overall while the 20-year-old Abi Smith also made it into the top 10 and took third in the youth classification.

The outcome was that EF Education-Tibco-SVB also won the team classification.

The perfect start to a season with a new team, after a switch from the GreenEDGE Women’s WorldTour squad, now known as Jayco AlUla, following six seasons with the Australian team.

“I guess at GreenEdge I was very comfortable,” said Williams on the sidelines of the race. “I knew everyone. I know the girls really well and everything and here I feel like I am going a bit out of my comfort zone, which is exciting for me.“

“I’ll be a little bit of a team captain and I just want to help the girls,” Williams told Cyclingnews, right before she went out and led by example in South Australia. “I feel like it’s almost like a new job, a fresh start, it’s all really exciting it’s keeping me going.”

Starting the season “on the right track” bodes well for what’s ahead, which will first be the Deakin…