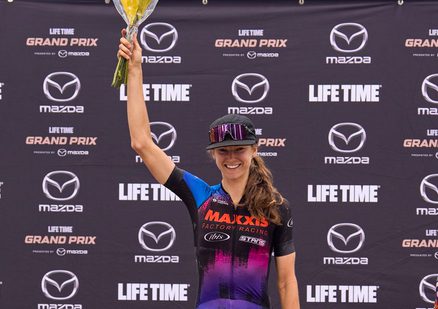 Life Time announced the 70 riders who will contest its 2023 Grand Prix series. The expanded rider list includes four Canadians. For its second year, Life Time Grand Prix attracted a more international field, though it is still primarily made up of North American athletes.

Haley Smith, winner of the inaugural Life Time Grand Prix, is back to defend her 2022 title next season. She is the lone Canadian in the elite women’s field.

“I believe this style of event is the future of the sport. It’s refreshing and motivating to be part of an event style that is focused on mass participation and getting more people involved at all levels of ability,” Smith says of her experience at the 2022 Life Time Grand Prix. I very much think pros have a role to play in this equation, and part of my purpose is to inspire people of all abilities to take up bike riding. These events accomplish just that!”

Smith will face a strong field of challengers, returning and new. They include Sarah Sturm (Durango, Colo.) and Sofia Gomez Villafane (Heber City, Utah), runners-up in 2022, are back. As are Alexis Skarda and Hannah Otto. Among the new faces is U.S. cyclocross powerhouse Raylyn Nuss (St. Louis, Miss.).

“The previous season helped to confirm the choice I made to leave road racing behind and really helped to regain the hunger to train and hustle again,” said 38-year-old Britton of his return to the 2023 Grand Prix.

The Canuck trio will face off against returning champion, Keegan Swenson. The Utah racer dominated the 2022 Grand Prix series. Both runners-up, Colorado’s duo of Russell Finsterwald and Alexey Vermeulen return to try unseat Swenson. As are Lachlan Morton, Peter Stetina and Payson McElveen.

New for 2023 is a more international feel to the Life Time Grand Prix. Where the first…