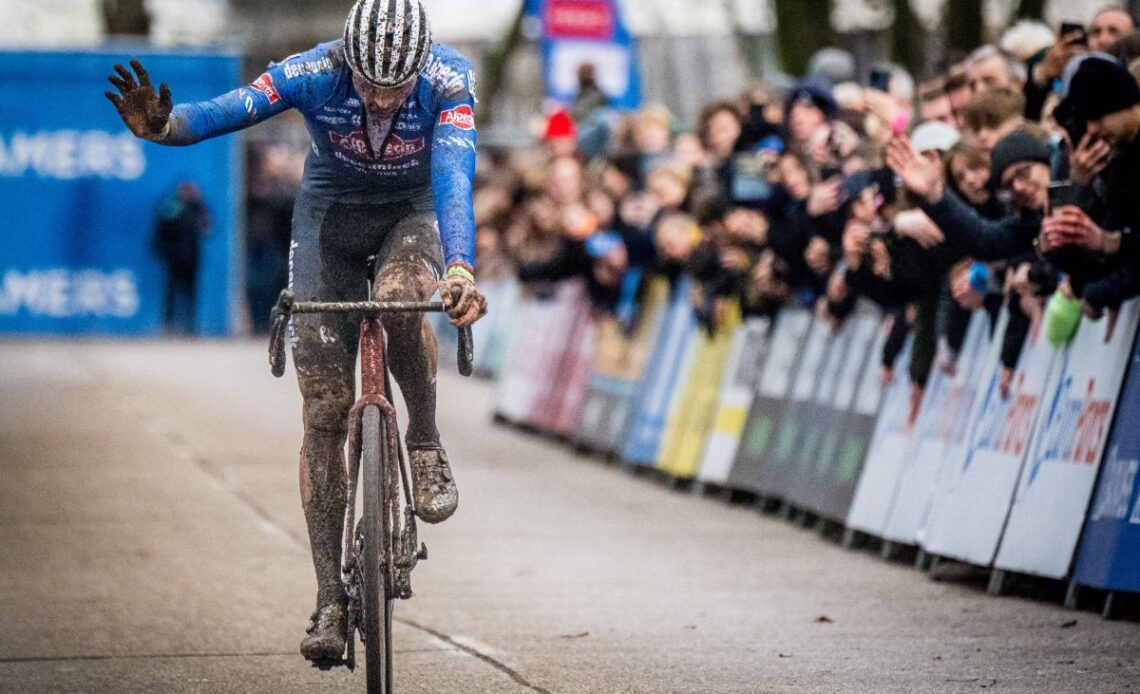 There has been a lot of talk this winter about a ‘big three’ in the world of men’s cyclo-cross, consisting of Wout van Aert (Jumbo-Visma), Mathieu van der Poel (Alpecin-Deceuninck) and Tom Pidcock (Ineos Grenadiers). However, with Pidcock not beating either of the pair this season, a big two has seemed more inarguable, more real.

This was certainly the case on Tuesday afternoon, as in the absence of Pidcock, Van Aert and Van der Poel went toe-to-toe at the Herentals round of the X20 Trofee, and could not not be pulled apart. That was the case until Van Aert had a puncture on the last lap, which handed the victory to his big rival.

In the women’s scene, there has been a less heralded big three this year, with Fem van Empel (Jumbo-Visma), Shirin van Anrooij (Baloise Trek Lions) and Puck Pieterse (Fenix-Deceuninck) dominating.

With the first two absent on Tuesday, it was Pieterse’s day to shine, and she led from the first lap to the finish, such was her dominance.

The 20-year-old won her fifth elite race of the season in comfortable fashion, pulling away from the first bend and then consistently putting time into the people chasing behind.

Initially, Pieterse was followed by her Fenix teammate Ceylin del Carmen Alvarado, but the latter quickly faded from contention for the win, and instead settled into a drawn out battle for second with Lucinda Brand (Trek Baloise Lions).

After lap four, Brand managed to distance Alvarado, and Annemarie Worst (777) came into the battle for third.

A second bike change for Pieterse almost went wrong as she clipped Rachel Rubino (Nice Bikes) as she was lapping people, but nothing bad came of it and Pieterse charged on towards victory.

The young Dutch sensation has not been off the podium once in any cyclo-cross races she has ridden this season, and won in 51-33.

Behind, Brand finished 27 seconds behind, and Worst came third in 1-13. The X20 series leader, Denise Betsema (Pauwels Sauzen-Bingoal), had a puncture on her first lap, and ended up losing over four minutes, and the overall lead.

In the men’s race, it was clear from the beginning that Van Aert and Van der Poel would be the ones to beat in Herentals. It was the former’s home race, and so he was determined to win.

Lars van der Haar (Baloise Trek Lions) was first round the opening corner, but he was quickly caught by the star pair and Jens Adams (Chocovit), who were the lead trio for the opening portion of the race.

Once Adams was finally…