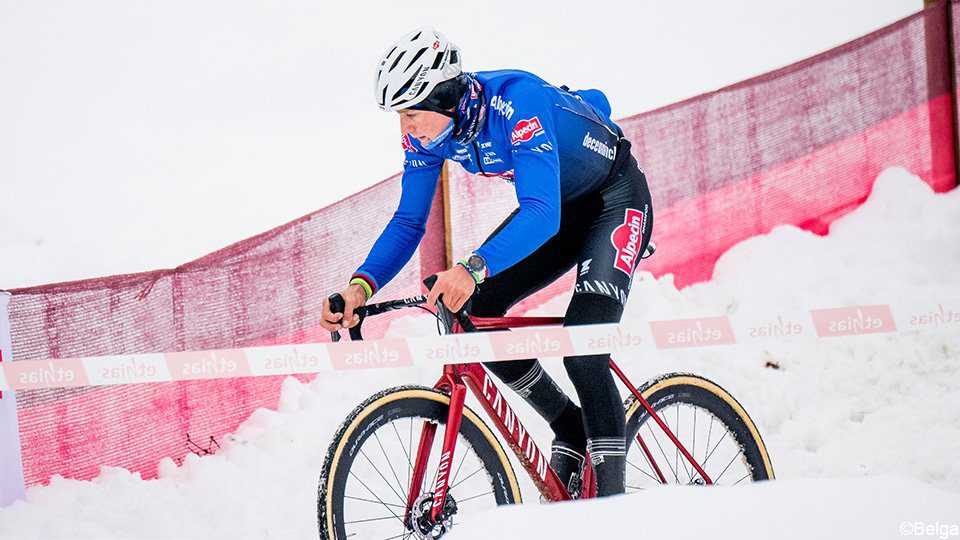 It’s not often you see Mathieu van der Poel finish outside the podium in ‘cross, but he did on Saturday at the Italian ski resort, Val di Sole. The race was slippery with several sketchy sections which saw some pretty nasty crashes. Top riders Eli Iserbyt and Fem van Empel both wiped out. MvdP didn’t speak to any press as it was clear he was frustrated with his result. However, former pro cyclist and world champion Adri van Der Poel, Mathieu’s father, weighed in after the race.

“I think Mathieu was scared,” he told Het Nieuwsbald, noting that his son never looked very comfortable during the race.

“It was simple, he didn’t have the confidence on the snow and ice. It showed at the start and during the race. Michael Vanthourenhout rode with confidence, Mathieu didn’t. You saw that at every corner.”

Vanthourenhout would take the win, dominating from start to finish.

“His form is certainly not the issue. If you look at his heart rate for the last five laps, I don’t think he went above 125. He was never in the game,” the 1986 Tour of Flanders winner said. “Every now and then he saw someone lying on the ground that had hit a post. That makes you think, doesn’t it? “We can’t forget that he raced ‘cross properly for two years. This performance is really the last thing I’m worried about. Next week is another race on a different course.”

5 reasons that cyclocross shouldn’t be in the Winter Olympics

Van der Poel has plenty of chances for redemption with a stacked racing calendar in the holiday season. He will be racing the Zilvermeercross event on Friday as well as three races in a row starting on Boxing Day, then races in Belgium, in Herentals and Koksijde at the start of January.