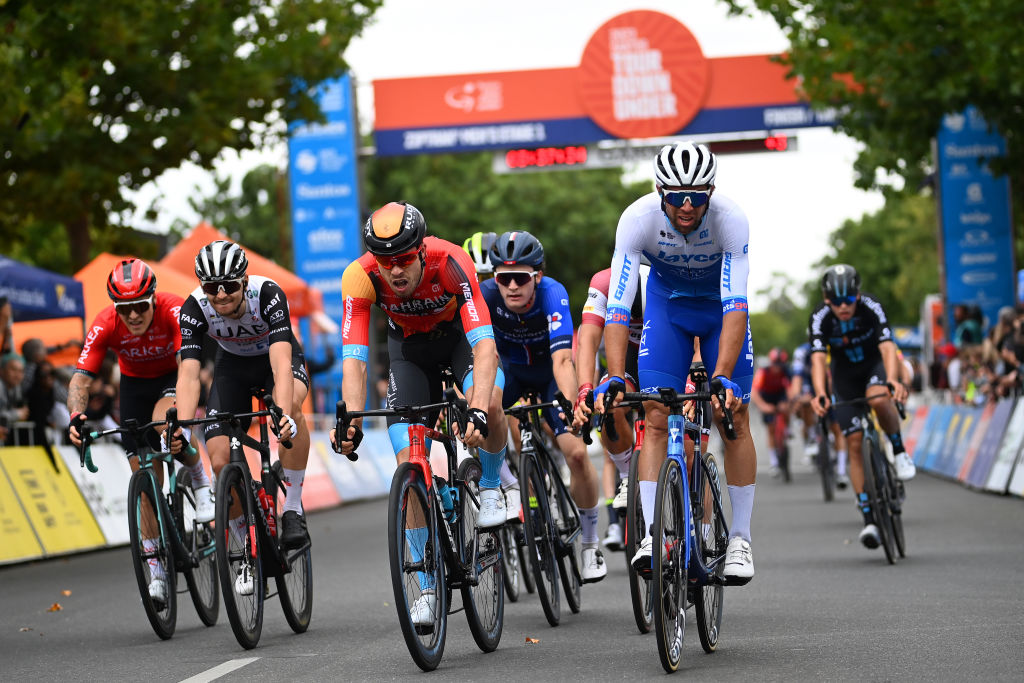 When Michael Matthews (Jayco AlUla) lined up in Tanunda at the start of stage 1 of the Santos Tour Down Under he was in tenth place overall. Yet even in a sprinters’ stage, the versatile and on-form Australian found a way to jump up the overall rankings and confirm his ambitions.

After conceding 14 seconds in the prologue to race leader Alberto Bettiol (EF Education-EasyPost) the Jayco AlUla rider didn’t waste any time trying to pull it back.

While many of his overall rivals will be surely attack on the climbs, Matthews is relying on his sprinting strength.

“It’s pretty obvious what our goal was to get as many time bonuses as we could,”

Matthews told reporters in Tanunda after finishing third on the stage.

“Last night we gave up a bit of time, So I think we made up for yesterday in one stage. Full credit to the team, they were amazing today.”

Matthews leapt out of the field and took on Ethan Hayter (Ineos Grenadiers) in the first intermediate sprint, beating him to the line to take two bonus seconds as Nans Peters was up the road so had already ridden away with top points.

Then on the next intermediate sprint Matthews went again, sweeping up second again, another couple of bonus seconds to add to the tally.

The biggest haul of the day, though was still ahead. Third place on the stage in the final sprint meant more than a podium place. It was another four seconds off his time.

That slotted him right into second place overall, ahead of Magnus Sheffield (Ineos Grenadiers) who crashed hard in the sprint but was given the same time as his rivals.

Matthews is now just six seconds behind Bettiol, less time than he managed to amass on Wednesday.

“If the other teams are going to let us have those time bonuses, we’re going to go for them, then when it comes to Corkscrew on stage 3, we’ll see what I have left,” said Matthews.

Jayco-AlUla have made it clear they are targeting the ochre leader’s jersey, multiplying their chances by also including Simon Yates in the line-up for the Tour Down Under.

“Obviously this team has a lot of success in this race. We know how to do it” said Matthews, ready to race hard every day and chase every possible bonus second.