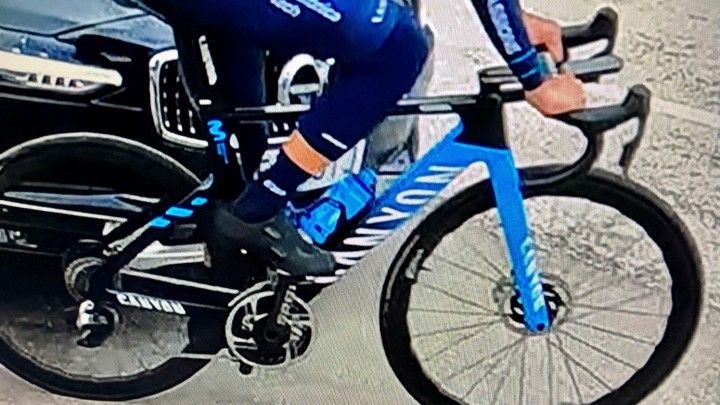 The off-season often sees new equipment rolled out for professional teams, but unusual prototype equipment is slightly more unusual these days. At times certain riders are asked to trial or test equipment during its development for manufacturers.

The Cyclingnews tech team have been keeping our eyes peeled over the last few weeks to try and stay on top of and bring you news of several mechanical and pro-rider new tech developments. Including Mathieu van der Poel’s prototype Canyon and Fabio Jakobsen’s new aero cockpit. There does seem to have been a spate of new equipment silently appearing lately ahead of the 2023 race season.

Most recently, we have spotted some images and video of what look to be prototype Sram shifters fitted to at least one of the recent Movistar canyon bikes at a recent training camp. The pictures in this article are pulled from one of the recent Movistar youtube videos which we have been poring over with a magnifying glass. You can also find a thread on weight weenies (opens in new tab) on the subject which also alerted us to this news.

Rumours of a new Sram groupset have been swirling for some time now, and the sight of these new prototype levers in the wild could be a sign that Sram is getting closer to launching a new groupset/s. If a new groupset does appear next year there is a decent chance it could be in the form of a new Red groupset that will then share its technology and features with the lower-tier groupsets.

The prototype shifters in the above pictures are a radically different design to current Sram offerings and draw comparisons with GRX di2 units which have a vaguely similar shape. The lever bodies themselves appear to be slimmer with the brake lever blades themselves having some backward sweep. The tops of the hoods also appear smaller, so it looks like SRAM is trying to make a more compact shifter unit.

Another point we picked up on earlier in the year was the majority of SRAM-sponsored teams this year using equipment with larger and more prominent logos than what is currently listed and advertised on the SRAM website. With shifters and chainsets in particular having larger ‘SRAM’ logos….