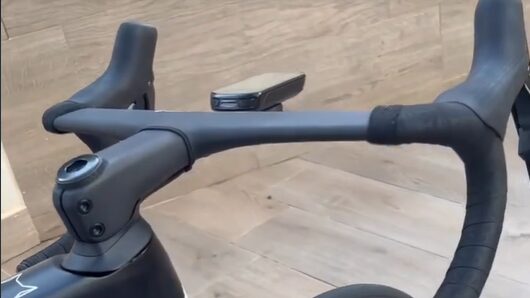 Usually browsing Instagram at work is something that’d at least get you a stern look from your manager (Josh, I was working, honest!). Sometimes, though, it leads to some insights, on the proviso that you’re browsing something at least relevant; pro riders, brands, and more often than you’d think, meme accounts.

Last night, Dutch fast man and current European champion Fabio Jakobsen uploaded a reel of himself seemingly tinkering with his new race bike. Given how stage-managed big teams are we suspect this was more of a ‘soft launch’ than an actual slip-up, but in any case, it appears that he’s sporting not only a new Roval aero cockpit but also a new Mirror saddle model.

Handlebars at Soudal-Quickstep are a little bit of a mixed bag. Some riders, Jakobsen included, have previously used the Roval Rapide aero handlebars, while some opt for the Alpinist cockpit, a similarly integrated unit but with a greater focus on low weight rather than aerodynamics. Some, like Evenepoel and Senechal, opt instead for an S-Works stem and bars from Pro, a Shimano subsidiary, usually, the Pro Vibe Aero SL model, which is still aero-optimised but unusually for this level of setup features internal cabling only until the stem.

We suspect riders on the team will still be given the freedom to pick their ideal setup, but in any case, this seems to be another option they will soon be able to choose from.

Like the Pro Vibe Aero SL, the Alpinist bars run the hoses under the integrated stem, but in a slightly more shrouded way. This new setup, which we suspect will become the ‘Rapide Cockpit’ or some such in keeping with the rest of the Roval nomenclature, also seems to feature the same hose routing. The stem is similarly shaped, but the bars have a pronounced aero top section, very different from the round shapes seen on the Alpinist.

Flying a little more under the radar it appears Lorena Wiebes of Team DSM has also snuck these out into the Instasphere under our noses nearly a week ago; it must have been a European champion’s only perk.

Jakobsen has traditionally opted for the longer S-Works Romin EVO with Mirror, but the saddle seen on his bike here isn’t that, the holes are different. It’s also too long to be the S-Works Power with Mirror. By the power of deduction and some educated guesswork, we suspect that this will be a new 3D-printed saddle, a Mirror…