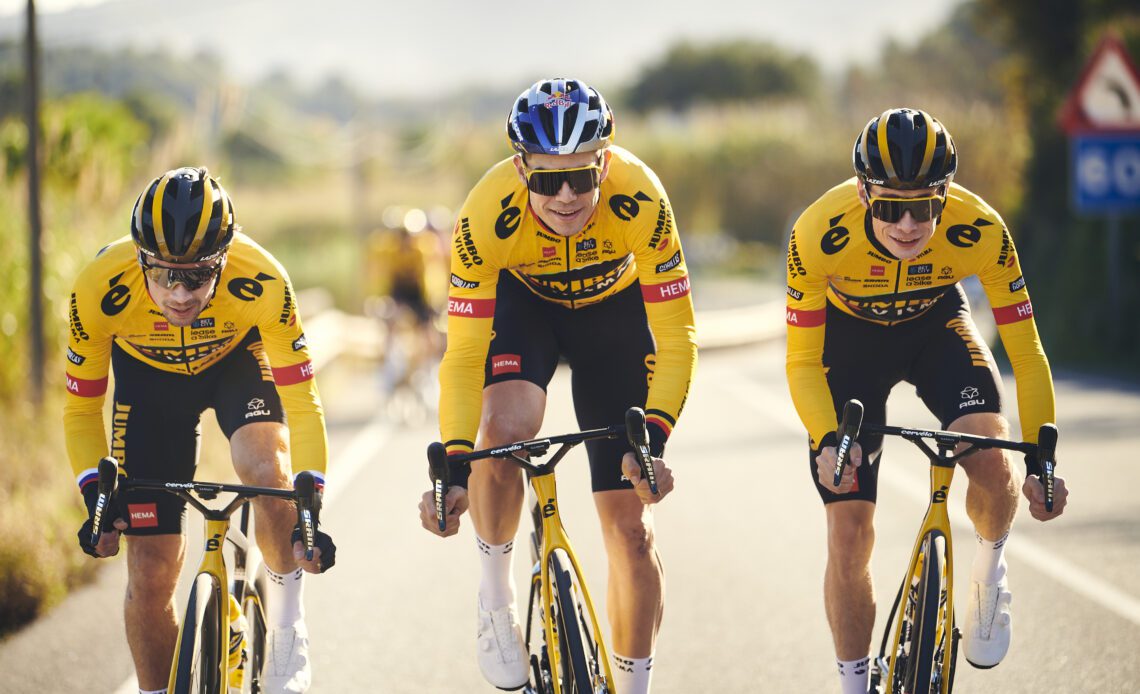 The Jumbo-Visma men’s team have revealed their 2023 goals during their team presentation in Amsterdam, with Jonas Vingegaard to defend the yellow jersey at the Tour de France, while Primož Roglič will instead target the Giro d’Italia with Wilco Kelderman and so not be part of the Dutch team’s Tour de France project.

Roglič was not at the team presentation due to family circumstances but had doubted he would be fit enough to target the Giro d’Italia after undergoing complex shoulder surgery in October. He only returned to outdoor training before the recent Jumbo-Visma camp, where the team’s 2023 goals were finalised.

“I was happy having Primož by my side and my wish was to go back to the Tour de France to defend my title. I’m happy I can go and we’ll try to go for one more,” Vingegaard said during the live presentation.

“It’s different going to the Tour now, compared to last year. Somehow there’s more pressure but also less pressure because we did it. If I don’t win it again in my career, I can still be super happy with what I’ve done.”

Vingegaard will be Jumbo-Visma’s only proven Grand Tour leader at the Tour de France, but team management are sure of their decision.

“Jonas will start with number one in the Tour and it’s an obligation to defend your title and that’s what we want to do,” senior directeur sportif Merijn Zeeman explained.

“It’s the process of a lot of things, of long talks and evaluations after the season with race coaches and performance coaches. We brainstorm about strategy and then have individual talks with Jonas, Primoz and Wout and look at the qualities of our team.

“I think we have a big luxury with two fantastic leaders for two fantastic Grand Tours, so we can make a very strong team around Primoz in the Giro and he will have Wilco Kelderman alongside him.

“Looking at the parcours of the Giro, we think it suits Primoz really well and we have unfinished business with the Giro. In 2019 Primoz was on the podium and said he wanted to go back one day. I think this is the right year to do so.

“A Tour de France team with Primoz and Jonas is a stronger team but we’re confident we can win the Tour as we want to. We have the same ambition for the Giro, which is a very…