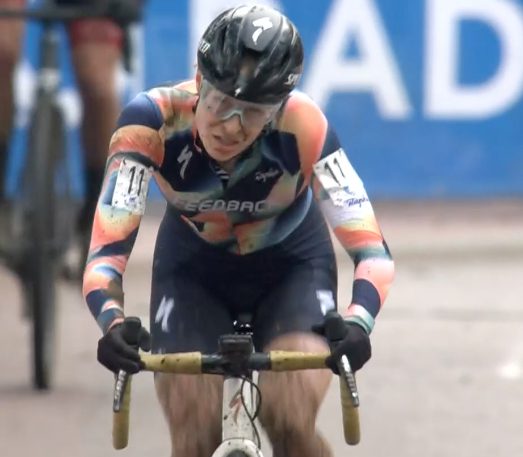 Puck Pieterse is not in the running of the 2022-2023 X2O Badkamers Trofee…yet. But on Tuesday she grabbed the victory in the fourth round in Herenthals, Belgium, her sixth triumph of the season and first of 2023. Series leader Denise Betsema had a bad day, losing chunks of time and having Lucinda Brand sail past her at the top of the standings. Maghalie Rochette was the top Canadian in eighth; she was also eighth in Baal on Sunday.

Earlier in the day, Isabella Holmgren followed up her victory in the Baal round of the X2O Trofee with third place in the Junior women’s race, her sister Ava coming in runner-up. Isabella is in the series lead by one second over Ava.

In the third round Sunday in Baal, Fem van Empel erased three-quarters of a nearly 2:00 deficit to Denise Betsema. Van Empel didn’t race Tuesday. Lucinda Brand carried the day in Herenthals last season on her way to the X2O Badkamers Trofee.

Pieterse headed into the mud field immediately after the start in the lead, with Ceylin del Carmen Alvarado on her six. Betsema had a flat tire far from the pits. Pieterse went solo in the second half of the 3.3-km circuit. Alvarado was 10 seconds back and Brand was 14 seconds in arrears after Lap 1. Annemarie Worst was also contending for the podium.

Alvarado and Brand rid themselves of Worst on Lap 2, Brand doing all the pulling. Pieterse kept gaining time in the mud and ate a gel crossing the line.

Brand crashed on the second circuit and spent all of Lap 3 of 6 working back to Alvarado. Pieterse had 41 seconds to play with.

Brand went clear of Alvarado on Lap 4. Pieterse collided with a rider she had lapped in the pits. Rochette was eighth.

Alvarado faded back even further on the penultimate lap, with Worst crowding her. Theirs was the main scrap on the final lap. Annemarie Worst prevailed to mount the podium.

The next round is Thursday in Koksijde, Belgium.