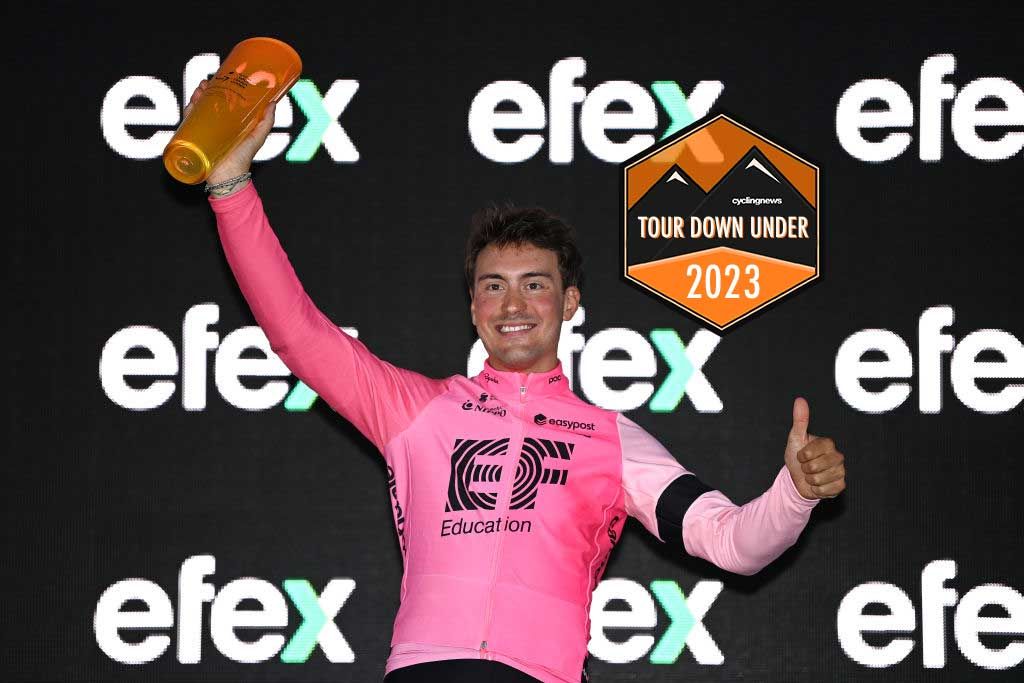 Unusual Australian summer rain wrecked the hopes of many of the Tour Down Under prologue contenders but added an extra twist to the battle for overall victory, with riders having to take massive risks on the wet roads to stay in contention of the first WorldTour race of 2023.

Alberto Bettiol (EF Education-Easypost) was one of just a handful of riders to race on dry roads and took advantage of the conditions to set a blazing time of 6:19 for the 5.5km course around the banks of River Torrens in the centre of Adelaide.

Everyone else had to race in varying degrees of rain, some getting soaked as the skies opened up, others racing when the roads were drying out but still slippery, especially at over 50 kph. Riders tried to use every marginal gain as they raced the time trial on their road bikes. Some aerodynamic tricks perhaps limited some rider’s losses but the overall contenders remain within 15 seconds.

The USA’s Magnus Sheffield (Ineos Grenadiers) was the best of the rest behind Bettiol, setting a time of 6:27 as the road dried, and took the young riders classification lead. The expected overall contenders were between 14 and 27 seconds behind Bettiol, and are still tightly packed and in contention, despite the rain.

Rohan Dennis (Jumbo-Visma) opted for a modest aero tuck set-up for his bike. He took risks and was fast but finished three seconds slower than Jay Vine and Michael Matthews, who were ninth and 10th, respectively.

Ethan Hayter (Ineos Grenadiers) admitted to Cyclingnews that he recently crashed while training in Mallorca and it dented his confidence. He finished five seconds down on Vine and Matthews.

Pello Bilbao (Bahrain Victorious) pushed the limits of the UCI bike position rules for road bikes in time trials. His brake levers were massively rotated inwards and he used them to create a ‘puppy paws’-style aero tuck position. He lost six seconds to Vine and Matthews but is still an overall threat.

Everyone who raced in the rain was happy to finish in one piece. Around half a dozen riders slid out on a nasty turn before passing under the King William Road bridge, but fortunately all got up and finished the time trial.

Cyclingnews waited for the riders beyond the finish line and gathered a number of reactions, some unsuitable to print, as riders vented their frustration about the rain disrupting the time trial and tilting it massively in Bettiol’s favour.