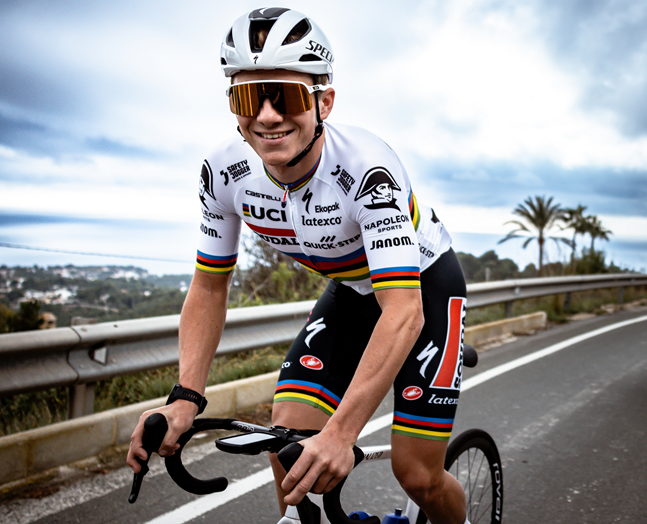 Patrick Lefevere’s team has a new title sponsor for 2023 and that’s largely down to the Remco Evenepoel effect. After eight years backing the Lotto team, Soudal have crossed Belgian cycling’s Old Firm divide, drawn like moths to Evenepoel’s light. Soudal spent last year emblazoned on the jerseys of John Lelangue’s underperforming outfit, doomed to relegation from the WorldTour. Now their name will appear above the world champion’s rainbow bands. A good time to be in the Evenepoel business.

Although the team formally rebrands as Soudal-QuickStep in 2023, its remodelling in Remco Evenepoel’s image was already underway behind the scenes for a couple of years. For almost two decades, QuickStep’s seasons had been built around the first two Sundays in April and, even in Tom Boonen’s pomp, much of their aura rested on collective might rather than individual stars.

For years, and especially as Boonen neared the end of his career, Lefevere shrewdly maintained an elite cobbled Classics unit by signing up motivated veterans on competitive deals, later allowing them to move on and cash in with bigger contracts elsewhere. The names atop the results sheet would change but the jerseys on the podium in April were invariably blue. But now, even though the self-styled ‘Wolfpack’ branding remains as conspicuous as ever, Evenepoel’s emergence has changed much of that dynamic.

Evenepoel’s generational talent ultimately attracted Soudal to sign up for five years but it also necessitated a considerable budgetary commitment. His Grand Tour ambitions, meanwhile, demanded support. In recent seasons, Lefevere’s few moves in the transfer market were focused on acquiring climbing talent to help Evenepoel, and the gaps that developed in the team’s Classics unit went unplugged. When Julian Alaphilippe skipped the cobbled Classics in 2022, QuickStep’s new frailties were exposed, and the team endured the worst Tour of Flanders in their history, with Kasper Asgreen their highest finisher in 23rd.

It was tempting to wonder at that point if the team had made a gross miscalculation in going all-in on Evenepoel, not least because the Belgian had suffered some stage racing setbacks of his own in the early season. But that was to overlook an inalienable tenet behind QuickStep’s decisions these past two decades. Or, to paraphrase John Giles’ pithy description of his old Leeds teammate Jack Charlton’s management style: Patrick Lefevere is not always right,…