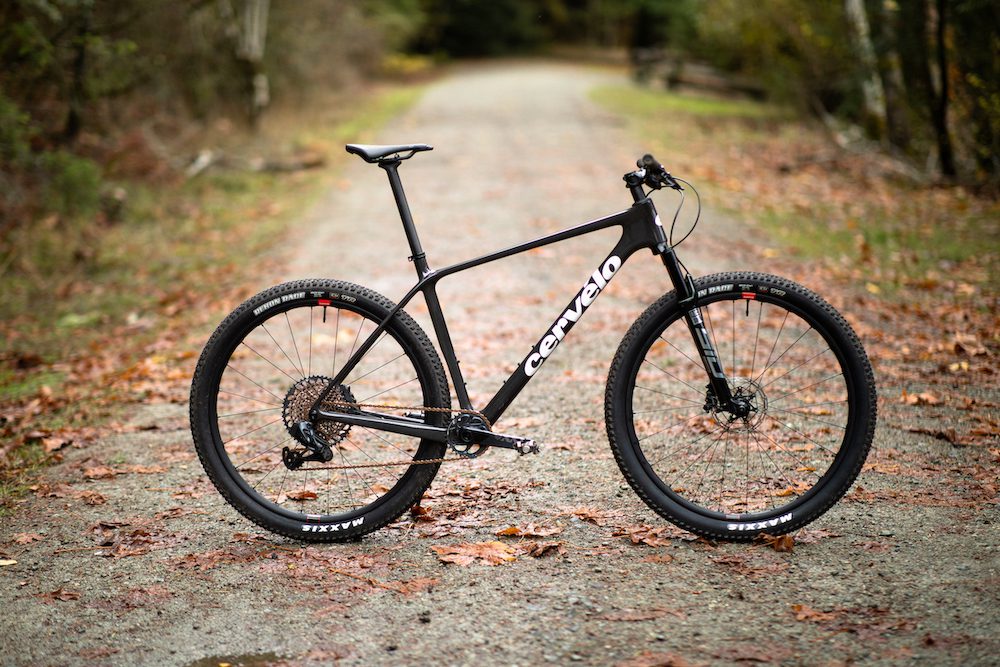 Cervélo may be new to mountain biking, but the once-Canadian brand is not new to racing. So it is no surprise that the ZHT-5 is, through and through, a race bike. In fact, it may make more sense to think of the ZHT-5 as an extension of the brand’s line further off-road, not a divergence into totally new territory.

The ZHT-5 was designed for Milan Vader when the Jumbo-Visma rider was looking to enter the occasional World Cup cross country race. In that context, a hardtail carbon-fibre bike with just 100-mm front suspension and no dropper post makes sense.

The frame weighs an impressive 907 g in size medium. Cervélo admits that it isn’t the lightest available, though it is within grams. The svelte-looking frame doesn’t show where the extra weight lies, but wherever the mass had landed likely adds to the ZHT-5’s balance of efficiency and shock absorption.

The geometry sits somewhere between classic and modern. Cervélo sticks with a 69-degree head-tube angle for agile steering. But, in an effort to keep the ZHT-5 more stable at high speeds, Cervélo opts for longer reach numbers with a mid-length (60mm on the XL) stem. This design makes sense for the type of race course the frame is designed for: faster trails on the less technical end of World Cup racing. It excels on tight, winding singletrack and will climb the steepest grades you can find. That’s not to say the ZHT-5 can’t take on harder trails, but the lower, more aggressive, forward position and lack of a dropper post (there is cable routing to run one) certainly suit gentler grades than steep, plunging trails.

Cervélo ZHT-5: on the trail

The ZHT-5 may cut a very similar silhouette to some other frames out there, but familiar angles and lines don’t necessarily mean the bike’s performance is the same. As with the production of carbon-fibre rims, the way in which a frame is built can make a big difference in ride quality. Layup and construction become especially important when a design can’t rely on the rear suspension to smooth out the ride and Cervélo has pulled off some impressive work in this area.

Pencil-thin seatstays that run into a wide, flat top tube, lend the ZHT-5 a much more forgiving ride than some other race hardtails. Cervélo also resists the pressure to overbuild the bottom bracket and chainstays. They are sturdy but not rigid, resulting in a bike that has lightning-fast acceleration but is also…