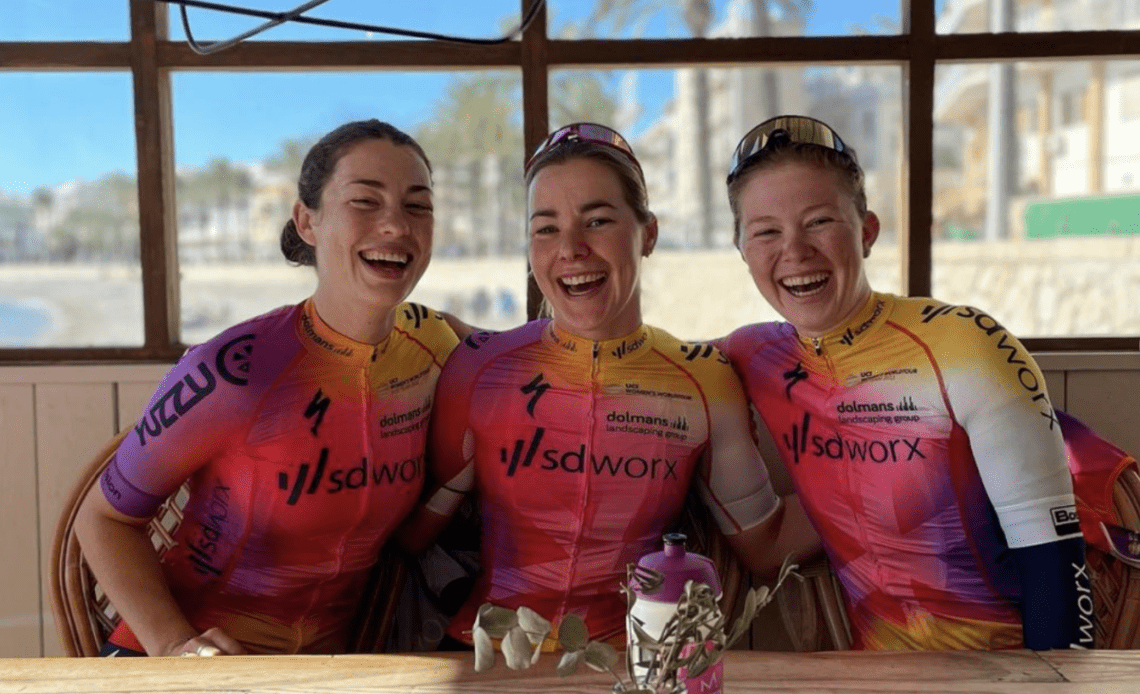 For most riders, joining a team that is repeatedly ranked the best in the would be an exciting by undeniably-daunting prospect. A team of winners, multiple-time national and world champions, now directed by one of the best female cyclists in history – a move to Team SD Worx may feel like a big step for a young rider coming from a UCI Continental team.

However, if you ask two of SD Worx’s newest recruits for 2023 how they feel about being in precisely that position, that’s not how they would describe their experience joining the Dutch superteam.

Mischa Bredewold, 22, and Femke Markus, 26, are both starting their WorldTour careers at SD Worx, moving up from the Parkhotel Valkenburg team. Instead of nerves about making the step up, the pair use the words ‘family’, ‘comfortable’ and ‘friendly’ repeatedly to describe their first few weeks in the team.

Speaking from the team’s 2023 launch, held in Antwerp’s ornate Royal Museum of Fine Arts, there is some apprehension at the scale of proceedings. “The presentations are a little bit bigger,” Markus remarks. What about intimidation about rubbing shoulders with the likes of Demi Vollering, Chantal van den Broek-Blaak and Anna van der Breggen? That’s of little concern for the Dutch duo.

“All the riders I knew already, and of course coming here together with Femke it was really nice, and Lonneke [Uneken] was already on the team,” Bredewold said. “We’ve been really good friends for years now so it already felt super comfortable to come here. But everybody has been super welcoming and it’s already quite like a family and good friends, so that’s really nice.”

Considering the alumni of the talent-nurturing Parkhotel Valkenburg set up, there’s something of a reunion going on at SD Worx in 2023, with Lorena Wiebes, Bredewold and Markus following in former-teammate Demi Vollering’s footsteps. On top of the excitement of moving to the WorldTour, there is an added layer of once again riding alongside old friends.

“I’m really happy I’m riding again with Lorena and Demi because I’m still friends [with them] since they left Parkhotel,” Markus said, who rode with Wiebes and Vollering in 2019 and 2020. “I really like how they developed themselves, and I’m proud I made it in the same team. I’m looking forward to race this year again with them.”

It’s an excitement that goes both ways, with Vollering pleased to have her friends back by her side, something she…