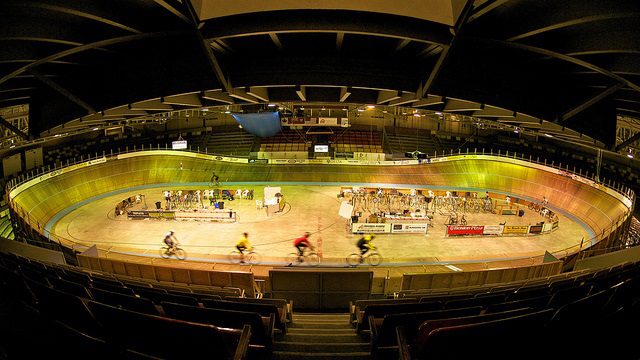 The Forest City Velodrome has been forced to temporarily shut down following a break-in that saw copper wire stolen from the building, leaving it without power. The crime was caught on the surveillance camera on Saturday at the London, Ont. facility.

According to an article in the London Free Press, the crime footage showed the suspect wearing scaling the telephone pole outside the indoor track at 5:30 a.m. on Saturday.

Board member Rob Fournier said the suspect was cutting the wires with a grinder. “He cut the three wires going into the building from the pole, broke the conduit that was holding them in place, and cut the wires at the ground level and pulled them out,” Fournier said. “Someone knew what they were doing.”

The suspect stole eight, 30-foot copper cables, according to Fournier.

“It’s thick copper wire,” he added. “It’s expensive to replace.” Similar to the the recent spree of thieves stealing catalytic converters for precious metals, stealing copper wire can prove to be a lucrative heist.
Copper can cost up to $5 for 0.5 kg at a metal recycling yard, almost five times as much as aluminum.

This isn’t the first time criminals have targetted the track. In the summer of 2022, 11 track bikes were ripped off following a break-in. After that, the velodrome staff increased security. But they never thought that thieves would also target infrastructure that wasn’t indoors.

“We beefed up the security system. We changed the locks,” Fournier said. “We have keypads to get in. Then, they hit us outside now.”