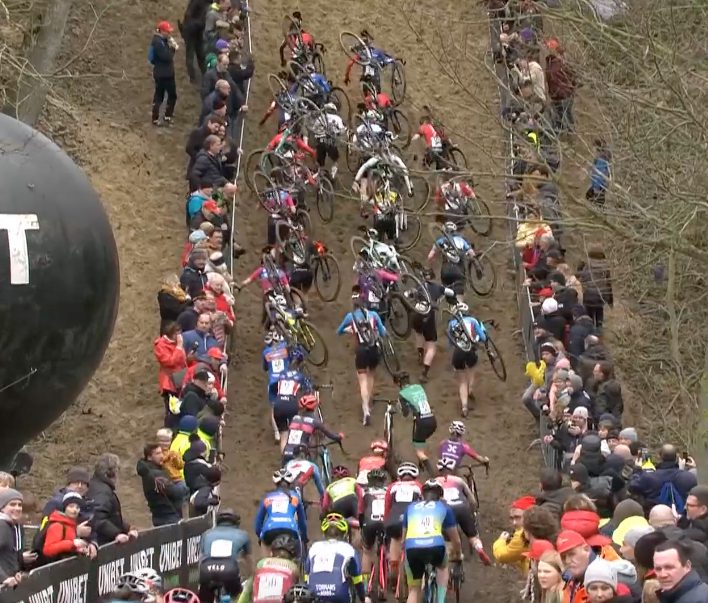 Shirin van Anrooij led from flag to flag in Thursday’s fifth round of the 2022-2023 X2O Badkamers Trofee on the sandy course of Koksijde, AKA the Duinencross. It was the Baloise Trek Lions rider’s fifth win of the season. Third place Lucinda Brand increased her overall lead.

Brand took the series lead on Tuesday with her second runner-up spot in the X2O Trofee since New Year’s Day. Denise Betsema trailed by 26 seconds and Ceylin del Carmen Alvarado by 29 seconds. World champion Marianne Vos was back in competition on Thursday, but there was no Puck Pieterse. Annemarie Worst took the Koksijde race last season.

The chase quartet fragmented on Lap 2. Van Empel surged ahead of Brand and Alvarado while van der Heijden faded back. Van Empel was 13 seconds in arrears with two circuits down.

On Lap 3 of 5, van Empel started to draw van Anrooij closer but a couple of mistakes derailed the European champion’s pursuit.

The penultimate lap saw van Anrooij continue to charge ahead. Brand was solo in Position 3, pulling out more time over Alvarado in the GC.

All three Dutch riders who finished on the podium kept their gaps on the bell lap.

The sixth round is January 28 in Hamme.