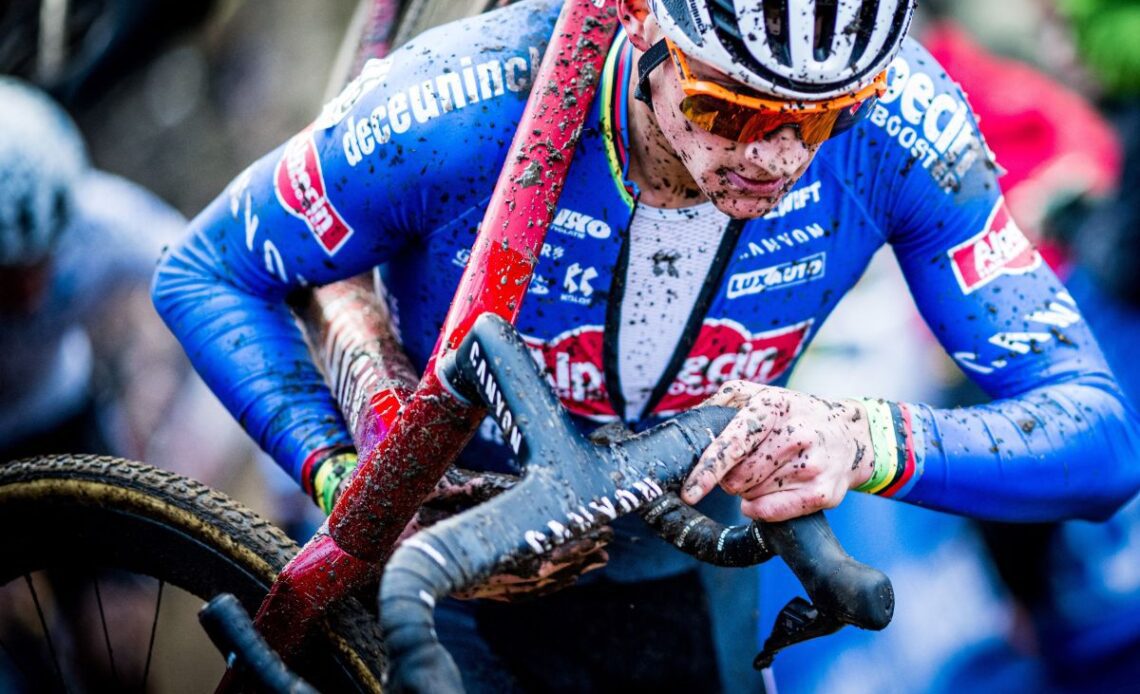 When I attended the launch of the new Canyon Ultimate in the summer I casually asked what was next in the pipeline. Maybe a new Endurace? “Maybe something for cyclocross but we’re not sure yet” was the slightly coy reply. Given we’ve already spotted a potentially new Aeroad it seems like we may be in for more than one new Canyon this year.

The X20 Trofee doesn’t have quite the same prestige as the World Cup or the Superprestige series, so it’s a more low-key place to sneak a new bike into the wild. Or at least it would be if you don’t go and win the round, which Van der Poel did after a late puncture for Van Aert. While the win was noteworthy in itself, as many CX victories are, the headline grabber was that he appears to be on board a new version of the Inflite. Let’s take a dive into what we can discern from race footage and photographs, shall we?

The current version of the Inflite has external cables. The bars on it are a one-piece unit, but the hoses exit before the stem portion before re-entering the frameset near the base of the headtube and on the upper portion of the fork shoulder. The bike Van der Poel was riding at Herentals though had no visible hoses. It appears to be the cockpit that is now shared between the Ultimate and Aeroad models, bringing another layer of complimentary design language across the road and gravel range.

This is further suggested in that the bars are more aero than those on offer on the commercially available Inflite models, the H31 Ergocockpit on the outgoing model and we’d suggest the CP0018 in this case.

Given the fully internal cables, there’s no need for the hole in the top of the shoulder. We can’t spot a blank or bung, so they’re at least a new pair for the model. The shape is extremely similar (identical?) to the fork from the Ultimate. Whether it’s the same fork, or a slightly beefed-up version remains to be seen, but given that Van der Poel rode the Ultimate for gravel worlds it’s not a stretch to assume it may well be the same fork.

In other respects, the frameset looks similar to the current model, but the design definitely edges closer to the Ultimate in other ways. The kink, enabling more easy…