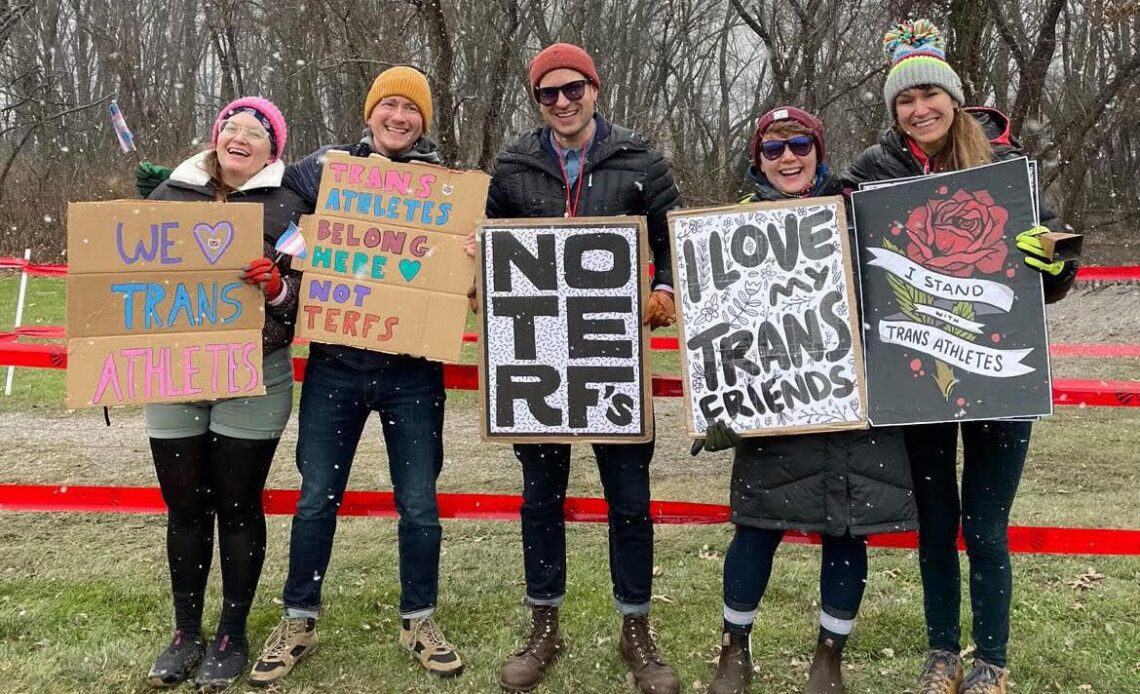 Ahead of the 2022 USA Cycling National Cyclocross Championships in Hartford, CT, this past week, organizers, racers and fans alike braced themselves for another showing of protests against trans athletes competing in women’s categories.

During the 2021 championship event in Illinois, a group of “Save Women’s Sport” demonstrators took to the cyclocross grounds holding signs and heckling trans athletes.

The group is “a coalition that fights to preserve sex-based eligibility standards for participation in female sports” and strongly opposes USA Cycling’s admission of trans women athletes in its women’s races.

The protests at that time were part of a nation-wide campaign that had sparked a social media outrage. Some condemned the protestors, but most condemned cycling’s governing body, USA Cycling, for either not putting a stop to the protests or conversely, for allowing trans women to compete in the women’s categories.

This led to USA Cycling amending its Fan Code of Conduct this year to include prohibiting “displaying signs, symbols, images, using language, or making gestures that are threatening, abusive, or discriminatory on the basis of race, ethnicity, national origin, religion, gender, gender identity, ability, or sexual orientation.”

In the end, the pre-event worries never materialized. Instead, last year’s hostilities led to a showing of love and support with images of kids in rainbow hats and signs bearing “We love our trans athletes” messages coming out of Hartford this year.

Online, however, the anti-transgender sentiment and protests continued across social media. Twitter in particular was a buzz after Austin Killips (Nice Bikes) —a target of last year’s protests— made history when she rode herself into the bronze medal in the women’s elite race behind three-time winner Clara Honsinger (EF Education-Tibco-SVB) and Raylyn Nuss (Steve Tilford Foundation Racing), thereby becoming the first transgender woman to podium at this event. Jenna Lingwood (Point S Nokian), another trans athlete, rounded out the top five.

“We braced for the worst but the only energy that filled Riverside Park was love and support for everyone racing their hearts out. Sometimes, thanks to careful planning and kind souls the best possible outcomes happen,” Killips commented in a post-race message.

“I just want to live in and help make a world marked by love, solidarity, and grace and the cyclocross community was able to realize that…