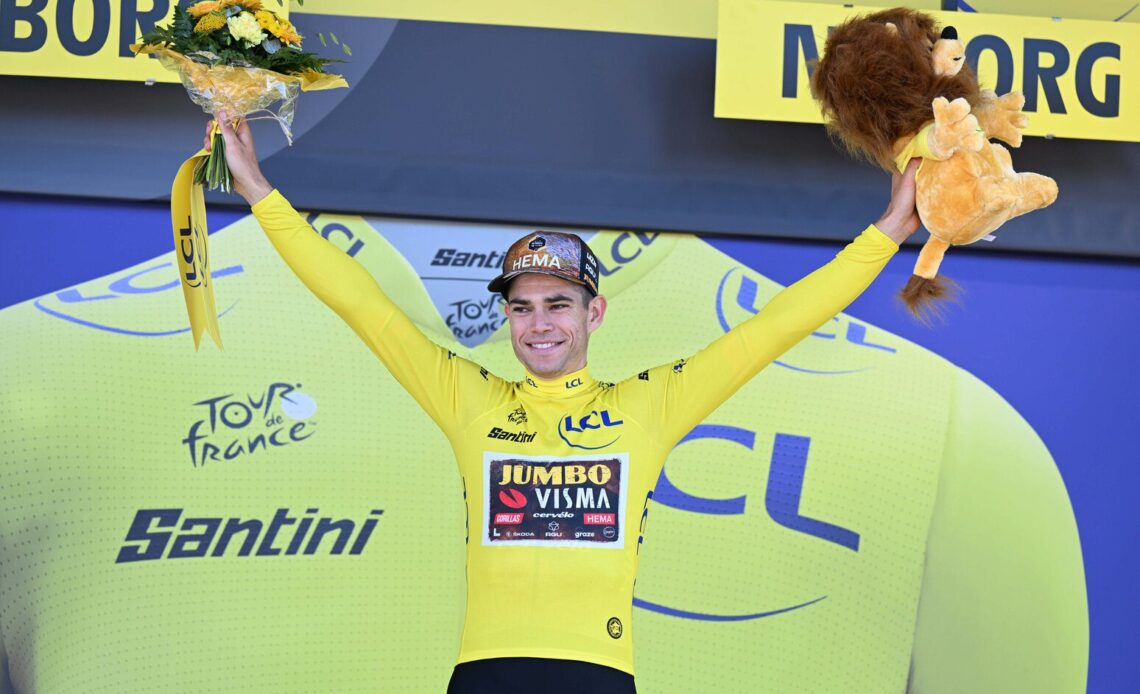 Team Jumbo-Visma’s Wout van Aert will be looking for stage wins more than the green jersey at the Tour de France this year, as well as some big classics wins and a possible rain jersey. According to a report in Sporza, there are two classics the Belgian wants.

“I want to win the Tour and/or Roubaix,” he said at the team presentation in Amsterdam. “So that goal is unchanged. These are high, but also logical ambitions. And I’m extra motivated after what happened this year.” Van Aert missed the 2022 Tour of Flanders following a COVID-19 infection and then took second at Paris-Roubaix.

With the signing of Dylan van Baarle to the team, Van aert thinks the team will be even stronger in the classics. “For the outside world, a lot may have changed after he won Paris-Roubaix, but for me that was the confirmation of how strong he is.,” the former cyclocross world champion said. “It’s just how you look at it. I already know that you need a strong team and with Dylan we will be even stronger.”

His spring season will start with Strade Bianche, followed by Tirreno-Adriatico and Milan-Sanremo and then the Flemish classics. After Roubaix, his classics season will end. “It was a difficult decision not to continue to Liège, but I want to focus on the summer because of the succession of the Tour and the world championships.”

As far as the Tour de France goes, van Aert is taking a different approach in 2023. “Next year, stage wins will be a priority. Green was a nice adventure, but stage wins stay with us more and the world championships which are only two weeks after the Tour is the big goal. That’s why I don’t want to focus on the points jersey from the start.”

Van Aert will hunt more for stage wins than for the green jersey, also because of the World Championships in Glasgow that will follow soon after the Tour.