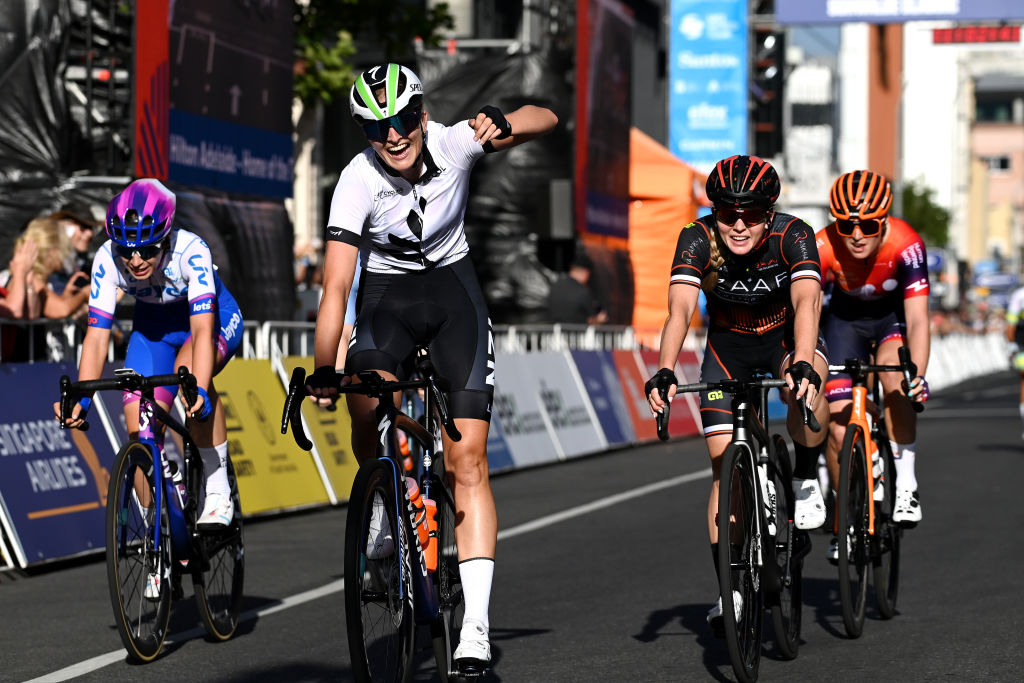 Ally Wollaston (New Zealand National Team) took out victory in the Schwalbe Classic, winning the one hour and one lap criterium curtain raiser event at the women’s Tour Down Under from an early break of eight.

The rider wearing the silver fern of New Zealand’s national criterium champion came over the finish line in the heart of Adelaide ahead of Michaela Drummond (Zaaf) and Nina Buijsman (Human Powered Health).

The race was held just outside the Tour Village on a 1.35 km course through the streets of the CBD in Adelaide, where it may have been into the evening but the temperature was still holding at close to 30°C, leaving riders line up with stockings loaded with ice down their backs and clad in ice vests.

The time trial runner up at the Australian National Championships, Georgie Howe (Jayco AlUla) was an early aggressor, out the front and taking the first of the intermediate sprint points but then Dutch FDJ Suez rider Loes Adegeest crossed the gap. Then with seven laps down the duo over the front became a group of eight as a chase of six closed the gap, and quickly started to help stretching the one to the field further.

The time advantage grew and grew, heading closer to 50 seconds and then near a minute. At this point it seemed to be advantage Jayco AlUla with two riders out the front including the speed of Roseman-Gannon. The lead group appeared to be in a dominant enough position that the talk started about what would happen if the field was caught – they’d be taken out with 2 laps to go was the answer to let the lead group have a clear run to the finish was the answer but the need to use this option never eventuated.

That’s because the gap was now shrinking, at 26 laps to go dropping below 30 seconds and then with one of the big teams who had missed the move – Trek-Segafredo – pulling on the front it ultimately fell below 20 seconds. With the pressure on from behind the attacks started among the leaders, with both Wollaston and Louw trying their hands but then Howe took the group in hand pushing the pace hard so her teammate Roseman-Gannon could maintain that advantage in the sprint.

It worked, in that the group stayed away to settle…