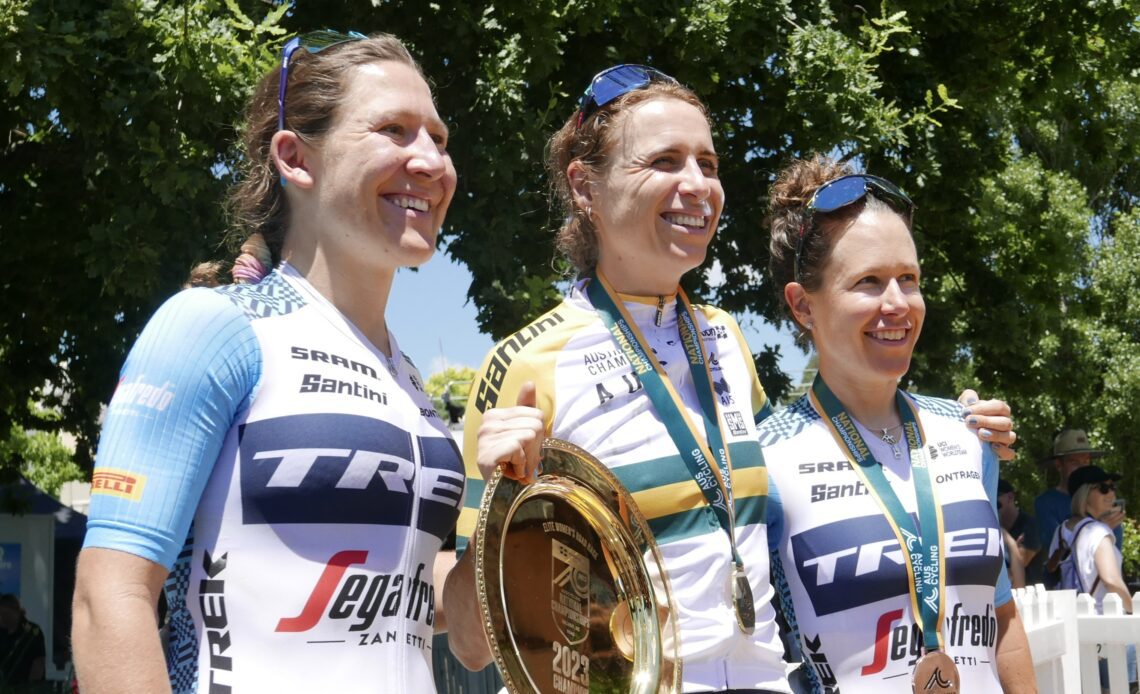 Brodie Chapman came down the finishing straight solo to claim the elite women’s road race title at the AusCycling National Championships on Sunday, claiming the green and gold striped jersey for 2023 in her first race with new team Trek Segafredo.

It was another second place for Grace Brown (FDJ-SUEZ-Futuroscope) who won the charge from the chase group of eight, while Chapman’s new teammate Amanda Spratt rounded out the podium, with her recently honed sprint enough to hold off Ruby Roseman-Gannon (Jayco AlUla) at the end of the 104.4km race.

A big group of riders shot off the front halfway through the race, quickly dropping the number in contention to little more than 20. All of the riders from Trek-Segafredo – Spratt, Chapman and Lauretta Hanson – were present and played their part to perfection as the rest of the race unfolded.

“Definitely putting on a new kit and having a new team gives you that extra little bit of motivation, also having been away from the Australian summer of cycling for the last few seasons, I want to make it count when I come back to visit,” a beaming Chapman told reporters after the race.

And that is just what she did in the very first race of her summer season, launching near the start of the final lap, holding off the chase on the Mount Buninyong climb and then stretching the gap through the descent and technical section through Federation University to finish 31 seconds ahead of her nearest rival.

“It was really the last 500m that I let myself believe it because it ain’t over till it’s over … in the last 500m I was like ‘oh yeah, nobody’s catching me now’ – they’d have to be really good,” she added with a chuckle.

Ella Simpson (Knights of Suburbia) won the U23 women’s title, after coming in on the tail end of the chase group of eight to take ninth.