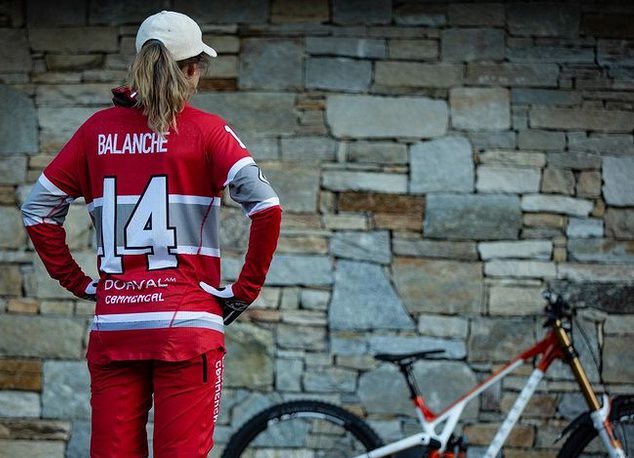 Take just a quick look and Camille Balanche’s custom world championships Commencal Supreme DH v5 would just look like the red and white of her home nation, Switzerlnad. But dive into the details and it becomes clear: Balanche race bike from Les Gets is a tribute to the Habs.

Balanche shared on socials that the red and white bike was painted for worlds to match the colours of her favourite hockey team, the Montreal Canadiens. It just happens to fit quite well with her Swiss national team kit. The theme makes sense for Balanche who was formerly Swiss Olympic hockey team player before switching gears to race downhill. For practice, the 2020 world champ even had a custom Habs-replica Dorval AM jersey. (slide six in the carosel below)

Proving that she’s as tough as any Hab to lace up their skates, Balanche raced the elite women’s downhill in Les Gets just over 20 days after breaking her collarbone. The injury happened in the Canadiens’ home province while the Swiss rider was practicing for the Mont-Sainte-Anne World Cup round.

Balanche may not have re-captured her world championship title on Saturday, but racing to fourth so soon after an injury like that is incredibly impressive.

Check out the details and Canadiens refrences on Balanche’s Commencal below: