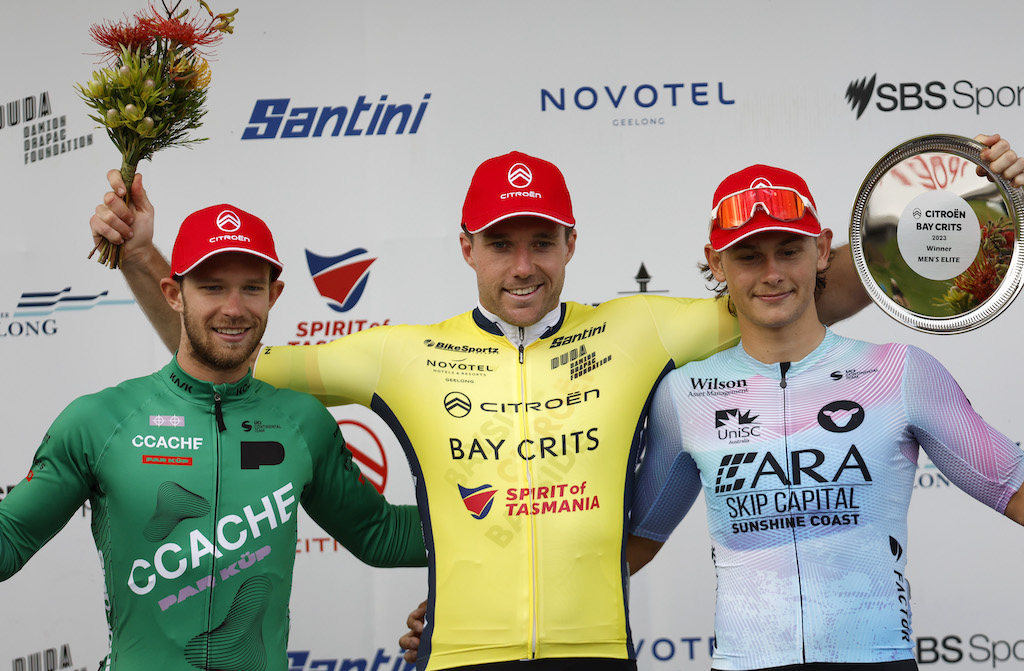 Brenton Jones had grown up on the sidelines of the Bay Crits and, as he finished his cycling career, it was his dream scenario to walk away with overall victory in the race, and that became a reality on stage 3.

Jones sprinted to victory on the Ritchie Boulevard “hot dog” circuit, claiming his second stage win and, by the tightest of margins, taking back the yellow jersey of overall leader of the Citroën Bay Crits from Graeme Frislie (CCACHE x Par Kup).

Frislie, 21, crashed during the stage but he rejoined the field and regrouped to sprint for third behind Blake Agnoletto (ARA Skip Capital). It was enough to put Frislie on equal points with Jones, though the retiring 31-year-old had also won stage 1, which put him at the top of the leaderboard.

“I knew it was going to be hard with the quality of riders in this race but I have experience – I’ve won this race before,” Jones said on the podium as his teammates and family, including his heavily pregnant wife, looked on proudly. “To win it two times now is unbelievable. It is a fairytale.”

Right from the start of the race Jones made his intentions clear, he was in some of the form of his life and wanted to go out on top at the event, which started in 1989 and had been such a big part of his existence, from the 2014 victory, years of memorable competition and, before that, years of helping on the sidelines as his mother Karin Jones has long been a vital part of the organisation.

Jones, racing with the Bayside Citroën composite team which included Australian Road Champion Luke Plapp and Bay Crits defending champion Blake Quick, but there was no doubt who the squad was working for right from the beginning with Quick delivering a stellar lead out on stage 1 and celebrating his teammates victories with gusto.