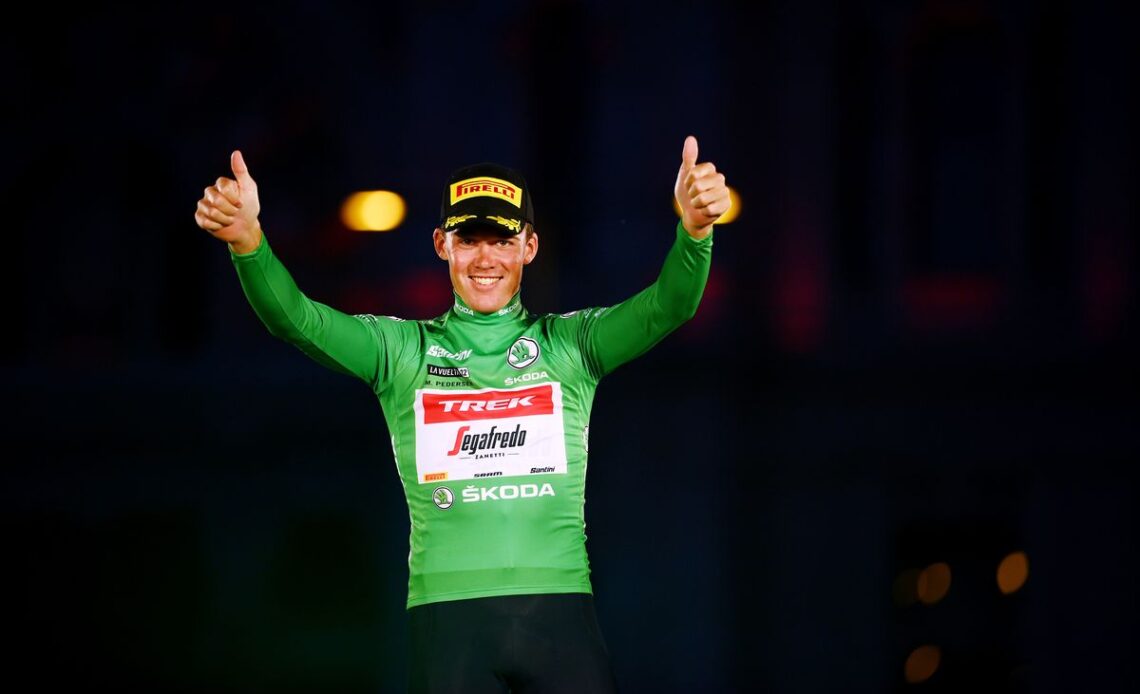 And here’s where I try to find exciting things to talk about regarding unexciting teams! Well, teams that haven’t been all that exciting of late anyway. Maybe 2023 will be a bit more memorable for Trek-Segafredo, the slightly Italian, even less American, squad that traces its timeline back to the Leopard days just over a decade ago. That was a star-studded era for the team and they won monuments and grand tours alike, and as recently as 2021 they had Jasper Stuyven’s MSR win to celebrate and spent the previous year (2020, blerg) defending the rainbow jersey. But 2022 was a certified dud. And they are a few years out from having the likes of Porte and Nibali giving them a credible contender in a grand tour. The team has gotten pretty young lately, and they are going to need to see some results before too long.

Anyway… stick around for the kit reviews!

When do you decide to call a guy a superstar? That’s a question for Mads Pedersen, who took over the Vuelta a España points chase by just bulldozing the competition, and seemed primed for more, only to end his season before chasing a world title where he would have been a favorite. If that sounds like a criticism, it had been a very long season — he finished the Tour de France too — and a trip to Australia would not have been nothing. All for a shot at a jersey he’d spent a year in already… I’m sure it was the right decision for him or he wouldn’t have made it.

Apart from a world title in 2019, Pedersen has wins in Gent-Wevelgem, Tour and Vuelta stages, KBK, a near miss in Flanders, and high volume production for a not-so-pure sprinter, 27 victories to his professional name. So is he a superstar? I’m going with no, not yet, but this is a big year for the Dane. He’s firmly in his prime (27) so it’s not like now or never, but he has previously shown that he is a potential force in the Cobbled Classics and coming off a strong performance last year, it seems like this could be a golden opportunity for him to burnish his resume in a big way.

In a lot of sports, having a super young roster tends to generate more smoke than fire. Dreaming on the potential of the next great young rider is a hallmark of the sport now more than ever, but that’s our problem. Trek’s job is to actually…