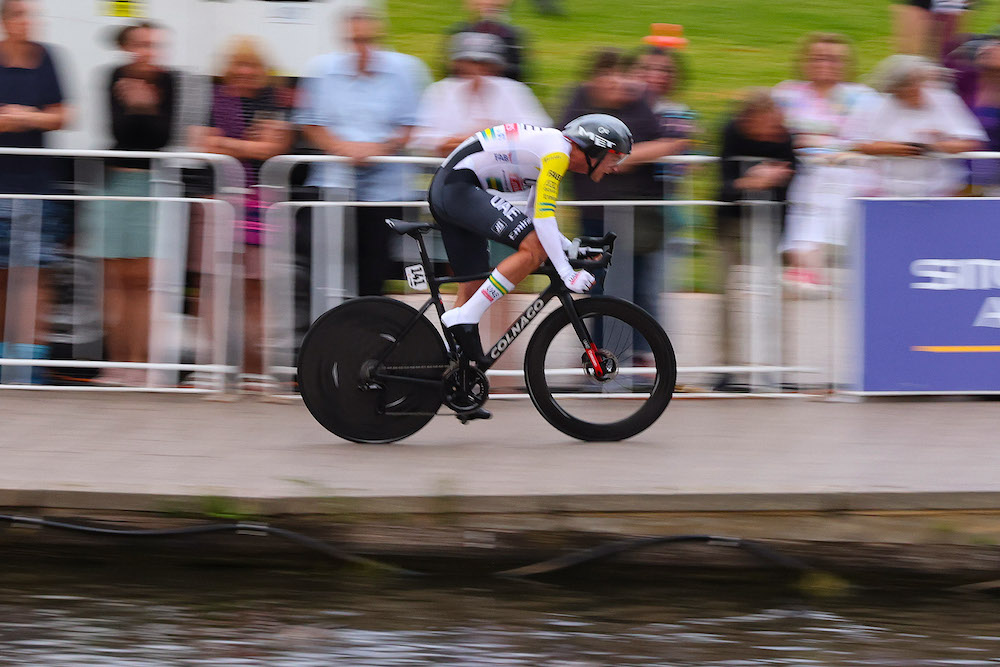 Jay Vine (UAE Team Emirates) proved comprehensively at the Australian Road National Championships just a week ago how powerful he was in a race against the clock, surprising the traditional rivals as he entered the event for the first time and claimed the green-and-gold stripes of the Australian Champion.

He got to wear them in competition for the first time on Tuesday at the Tour Down Under prologue. While it may have been a race against the clock, there was very little in common with last week’s effort that covered 37.5km in 46:38 on a time trial bike over the Australian Championships course near Ballarat.

This was just 5.5km, with damp conditions thrown in for most as well, and no time trial bikes either. But Vine still managed to excel, carving out ninth place with a time of 6:34, 14 seconds behind race leader Alberto Bettiol (EF Education-EasyPost), and giving himself an advantage over many of his key overall rivals.

“You’ve just got to get on with it,” Vine told Cyclingnews after the prologue that opened the 2023 Tour Down Under. “I don’t get to choose all the courses. If it was my choice, it would have been about 40 minutes longer.”

Riders like Rohan Dennis (Jumbo-Visma), Luke Plapp (Ineos Grenadiers) and Ethan Hayter (Ineos Grenadiers) are likely to agree. Still Vine coped admirably with the less than ideal circumstances, finishing in ninth, one spot ahead of Michael Matthews (Jayco AlUla), who is considered a key favourite for the overall and faced some of the wettest conditions.

Bettiol, however, went out early as the fourth starter before the rain came down and took the hot seat early, and holding the top spot until the end.

Vine lined up along with the final group of riders, and while the rain had eased, it was still far from dry. Vine said it was still pretty slippery.

As those around him who were marked as names to watch struggled, Vine seemed to find the resolve and forge on. Now in the top 10, his key rivals sit nearby, with Rohan Dennis (Jumbo-Visma) in 15th and Patrick Bevin (Team DSM) in 17th both 17 seconds back, while the Ineos pair of Hayter and Plapp are 21st and 24th, respectively, Hayter 19 seconds off the lead pace and Plapp another one second back.

“I’m very happy with the result, in spite of all the conditions and in a short time trial,” Vine said. “It’s not my strong suit. So yeah, I’m really happy.”