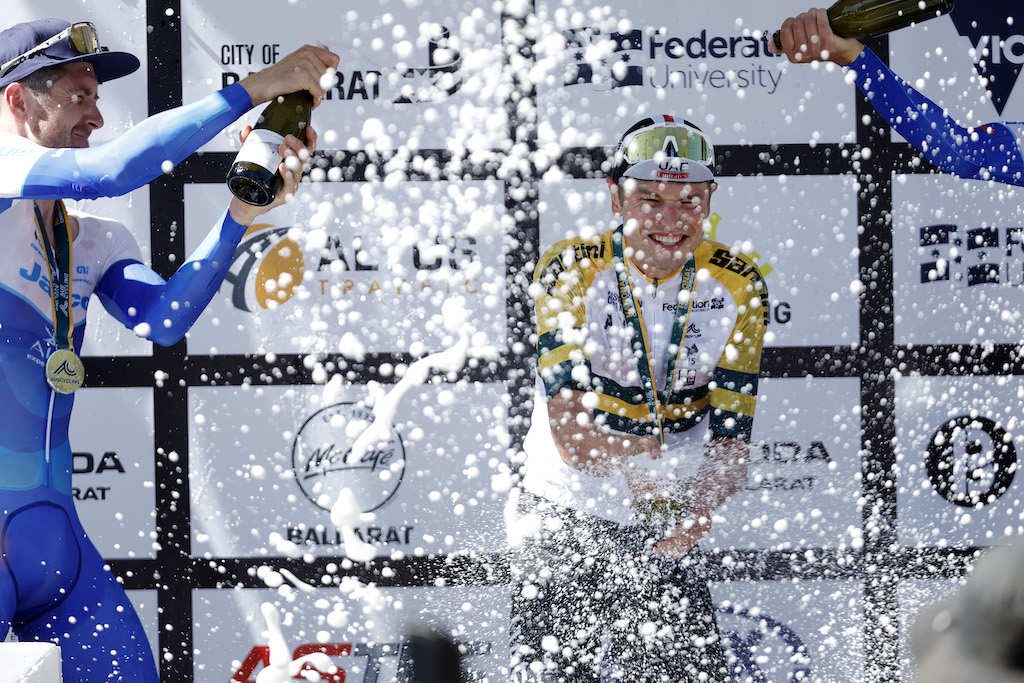 As former victors in the men’s elite time trial at the AusCycling Road National Championships Luke Durbridge (Jayco-AlUla) and Luke Plapp (Ineos Grenadiers) were lining up as firm favourites, but neither would stand on the top step of the podium in 2023 as surprise winner Jay Vine (UAE Team Emirates) stepped up to claim the national title instead.

It was the tightest competition the elite men’s national time trial has seen in years, with the first four riders all within 27 seconds of the winning time in the closing event of the 2023 Australian Championships.

Durbridge, had to settle for second missing out on Vine’s time of 46:38.84 by just 2.72 seconds. It was Jayco-AlUla teammate Kelland O’Brien who took third on the 37.5km course around Federation University in Ballarat, finishing just a second ahead of 2021 winner and road race champion Luke Plapp (Ineos Grenadiers) who posted a solid time despite dropping a chain on lap 2.

Vine, who won two stages of the Vuelta a España in 2022 and made the switch from Alpecin-Deceuninck to UAE Team Emirates at the start of this season, hasn’t lined up at an elite time trial at the Australian National Championships before so was somewhat of an unknown quantity in the race against the clock in Ballarat. Though his eighth place in the stage 5 Etoile de Bessèges – Tour du Gard time trial at the start of last year perhaps provided some hint, as was his National Tour time trial victory in 2020, back in his National Road Series days before the Zwift Academy win catapulted him to Europe.

“The time trial is probably my pet event from back in the day but I just haven’t been able to go fast in a good position since turning professional,” said Vine after taking the title. “Being able to get on a good bike with the team, they got me in the right position and I tell you what there are more improvements to be made, so it is pretty exciting.”