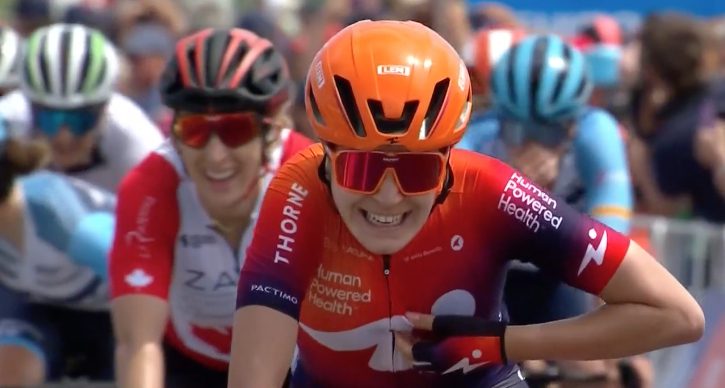 Maggie Coles-Lyster, resplendent in her national champion’s jersey, came in fourth in Sunday’s opening stage of the Santos Tour Down Under in Aldinga, South Australia. Human Powered Health’s Pole Daria Pikulik sprinted to the win and first leader’s jersey. For the first time ever, the UCI Women’s WorldTour kicked off before the men’s series, which begins on Tuesday. Back after two COVID-19-cancelled editions the Tour Down Under is three stages long and concludes on Tuesday.

The Tour Down Under is the first of four additions to the Women’s World Tour in 2023. The UAE Tour is brand new, and the TDU, Omloop Het Nieuwsblad and Tour de Suisse have all achieved WorldTour status.

None of the 2022 WorldTour top-10 is in Australia, nor is Annemiek van Vleuten’s Movistar squad or Demi Vollering and Lotte Kopecky’s top-ranked SD Worx. However, the field is awash with talented Australians, including the two top Aussies from 2022, FDJ-Suez’s Georgia Brown and Jayco-Al Ula’s Alexandra Manly. Three-time Tour Down Under winner Amanda Spratt raced for Trek-Segafredo.

The Canadian contingent is Simone Boilard, who was 10th in last year’s RideLondon Classique, and Coles-Lyster of the Spanish Zaaf squad. Coles-Lyster was going to transfer to B&B Hotels after three years with DNA Pro Cycling before French team collapsed..

Put your game faces on, it’s time to see which riders will race into the history books 🙌#TourDownUnder @UCI_WWT pic.twitter.com/O1Iu6bXHnG

Boilard crashed soon after the start in Glenelg and finished last on the day. Echelons formed in the crosswinds and the peloton was split for a few minutes. With 35 km to go, a couple of Australians finally broke away. With Trek-Segafredo and Jayco pulling to make the catch, the field almost split again. The sprint trains formed and in the final 200 metres, Pikulik powered between Georgia Baker and Clara Copponi for the victory.