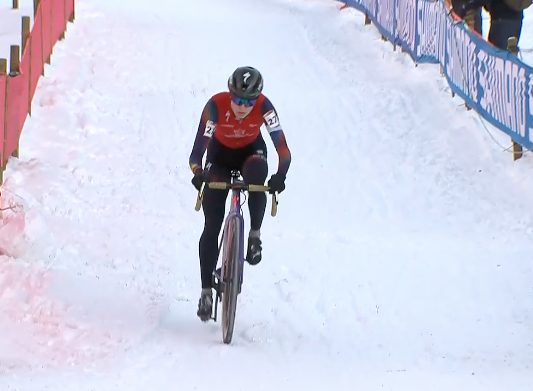 For the second season in a row, the Val di Sole, Italy round of the 2022-2023 UCI Cyclocross World Cup was a snowy one. Maghalie Rochette returned to the top series in cyclocross with fifth place on Saturday, compatriot Sidney McGill ninth. Series leader Fem van Empel crashed out of the race on Lap 2, while Puck Pieterse rode to her third World Cup victory of the season.

After claiming six out of the first nine rounds, Fem van Empel was 105 points clear at the top of the table over two-round winner Puck Pieterse, with Denise Betsema

Eighth place last week in Ireland, Canada’s Sidney McGill, having ridden five rounds, was in 21st place overall. She was on the start grid in Italy, as was Maghalie Rochette.

Rochette was pleased to be back racing at the top level.

Didn’t know if I’d be able to race at all this fall…but tomorrow I am lining up for my first World Cup of the season. That’s how happy I was after pre-riding the Val di Sole course. And how happy I am to finally be back 🤩🙏🏼
Photo by @billy_lebelge pic.twitter.com/bHfQ1UnTe3

The course was a winter wonderland on Friday.

Van Empel crashed off camera on Lap 2. The young Dutch star didn’t have to go to the hospital, but was limping around after she left the course holding her thigh.

Pieterse was riding with teammate Ceylin del Carmen Alvarado at the front, but Alvarado made an error that allowed Puck free rein. Alvarado had to dispatch Italian Silvia Persico for second place, and ultimately Manon Bakker rounded out the podium instead of Persico, as the Italian crashed on the final corner.

Pieterse closed the gap on van Empel to 65 points. Alvarado moved over Betsema into third in the standings.

The next round is Boxing Day in Gavere, Beligum