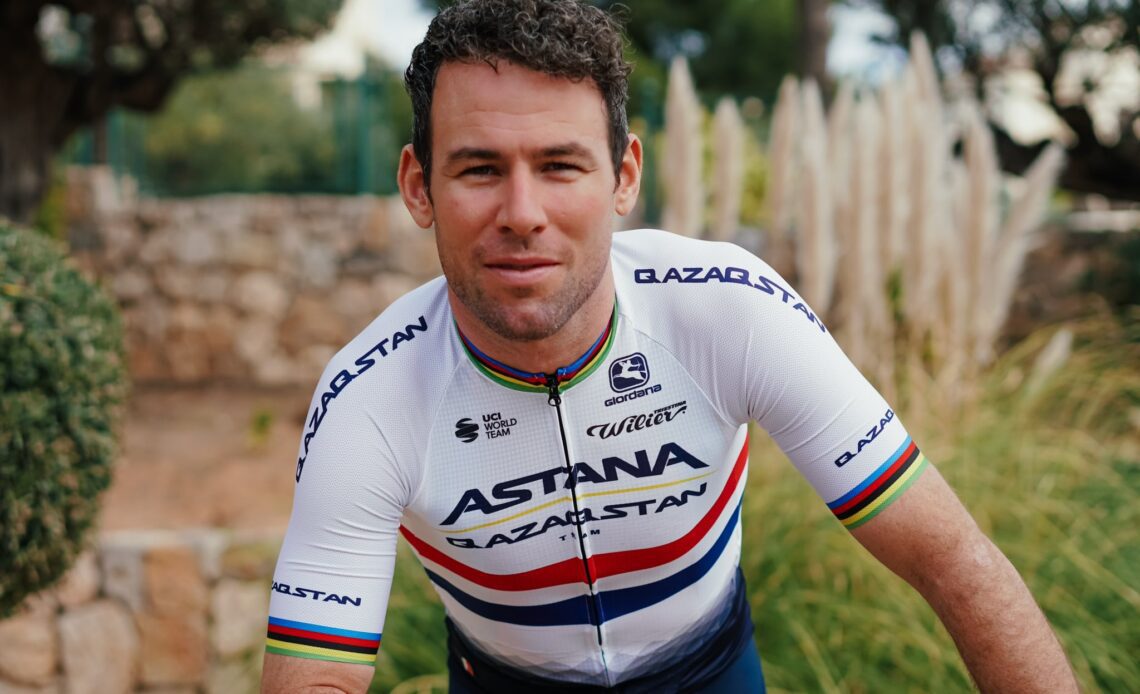 Mark Cavendish is set to make his racing debut with the Astana Qazaqstan team at the Tour of Oman (February 10-14) as the team begins to build a lead-out train that can help the Manxman win sprints and hopefully set a new Tour de France stage win record in July.

Cavendish is training with his new Astana Qazaqstan teammates at a get-together in Altea, Spain after the team finally confirmed his signing on Wednesday and ending months of speculation and reports about Cavendish’s future.

Astana’s interest in signing Cavendish first became public in mid-December when team manager Alexandr Vinokourov acknowledged to Cyclingnews that he had called Cavendish after the B&B Hotels project collapsed.

Now he has pulled on his British national champion’s jersey and Astana Qazaqstan shorts and can show off his Astana blue Wilier bike.

“I’ve enjoyed a long career already, but the joy of riding my bike and the hunger to continue winning are as bright as ever,” Cavendish said.

Astana Qazaqstan have won all three Grand Tours over the years but their 2023 roster lacks stand-out leaders after Vincenzo Nibali retired and Miguel Angel López was sacked because of alleged connections to a doctor under investigation for doping.

Astana Qazaqstan doesn’t have a track record of targeting sprint wins but the arrival of Cavendish changes their ambitions and he will play a key role in the team’s success in 2023.

Astana Qazaqstan directeur sportif Stefano Zanini was a successful sprinter during his career and he told Cyclingnews how he will now switch to working with Cavendish as they build a lead-out train and target sprints.

“It’s an honour that a great sprinter like Mark has decided to join Astana Qazaqstan,” Zanini told Cyclingnews at the Tour Down Under.

“He’s the best there is and probably the best sprinter in the history of the sport. We’ll do everything we can do to help him this season and set him up in every sprint we can contest.”

Zanini raced between 1991 and 2007, riding for Gewiss, Mapei, QuickStep and finally Predictor-Lotto. His palmarès includes victories at the Amstel Gold Race, on the Champs Elysees at the 2000 Tour de France and on the final stage of the 1994 Giro d’Italia when he beat Djamolidine Abduzhaparov.

Zanini is now 53 but ready to work closely with Cavendish and build him a lead-out team. Astana Qazaqstan have already announced the arrival of Cees Bol, who is likely to become Cavendish’s lead-out man.