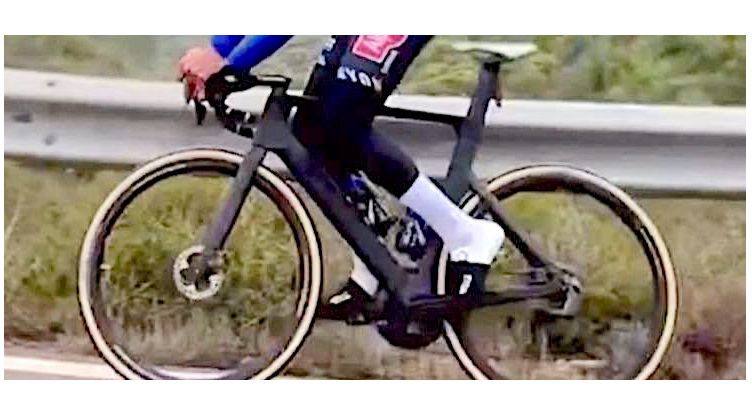 The off-season for most professional cyclists will often mean new equipment and becoming familiar with a new model of bike or even a switch to one or several brand-new manufacturers. Team leaders and star riders are often tasked with helping develop new equipment or test prototypes during winter team training camps.

The days of re-badged frames and custom-made bikes painted up in team colours seem to be long gone. Most professionals now have aero-optimised race bikes and perhaps the option of a second model depending on the terrain. High-end pro team bikes now are modelled by computer programmes and tested in the wind tunnel to ensure no crucial seconds are lost that could mean the difference between winning or losing. As such it is often big news when a star rider is spotted riding a prototype bike or new model in the off-season.

Tadej Pogacar’s new bike on the other hand has been no secret, with the Slovenian riding it for a good portion of this year in plain view. Our own Will Jones was present at the official launch of the new Colnago V4Rs bike recently and test-rode it himself.

Pictures and information has been uncovered by the Dutch website Wielerflits of Mathieu Van der Poel riding what appears to be a prototype Canyon bike or possibly a new iteration of the Aeroad model he currently uses.

The pictures of Van der Poel riding the mystery bike appeared briefly on Gianni Vermeerch’s Instagram and in a Strava activity by Van der Poel but have apparently since been removed.

We recently featured Van der Poel’s training bike which hinted at his 2023 race setup, but this new machine could be a sign that Canyon has something new in the works. The current Aeroad was launched in 2020 and has been ridden to some huge victories along the way.

The existence of the Aeroad hasn’t been entirely without mishap, however. Canyon instructed all owners to discontinue using the bike for a period in 2021 after Van der Poel snapped his handlebars at La Samyn and after a spate of issues relating to seatpost clamps and broken seatposts.

There could be a strong chance the as-yet-unnamed frame is a new version of the Aeroad, with the frame looking very similar to the Aeroad.

There appears to be a change in the frame at…