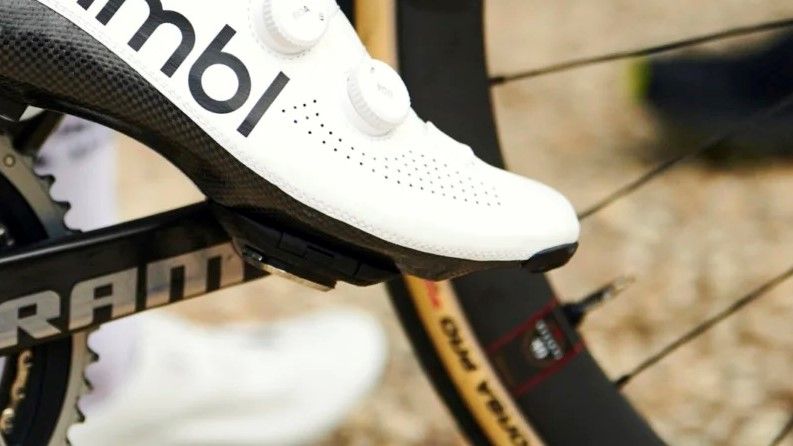 As each year draws to a close the great professional cycling equipment shuffle begins, sometimes a good few months out from the end of the year, as teams transition onto new equipment for the upcoming season. Jumbo-Visma have a slew of new gear, including Sram drivetrains, Nimbl shoes and Oakley sunglasses, but amongst the latest team bike promo shots, we think we’ve spotted a new Vittoria tyre, the Corsa Pro.

As you can see from the image, we’ve not got much to go on. However, the logos are not black, in contrast to all current Vittoria tanwall tyres, and there isn’t currently a “Corsa Pro” model in the brand’s lineup.

Here’s what we can realistically assume, with a little interpretation…

It’s a safe bet to assume the tread is going to be some variation on the current Corsa blueprint of lines running parallel with the direction of rotation. this is common to all Corsa models and we can’t see it deviating from this.

The “pro” moniker may denote an even slicker tread, a different rubber compound, and/or that the tyre is going to only be available to those in the pro peloton, much like the Continental Pro LTD.

Another key point is that these tyres appear to be tubeless, as indicated by tubeless valves installed into the Reserve rims (and the slightly misaligned tyre logos in relation to the wheel). Previously the tanwall versions of tyres in the Corsa line, those with actual cotton casing, were only available in clincher or tubular versions; only the black, less supple versions were available tubeless ready.

Team promo shots are all well and good, but Wout van Aert (and the rest of the team we presume) has been spotted testing these new tyres out in the Roubaix velodrome.

Paris Roubaix, the Queen of the classics, is always a big target for the superstar Belgian, and it’s a race where tyres play more of a role than at any other race with some teams having allowances in their contracts to use non-sponsor rubber for a single day. Jumbo Visma itself has previously swapped in custom-made tyres that paired a Dugast casing with a Vittoria tread. There’s no indication here that Dugast has been involved in the making of the new…