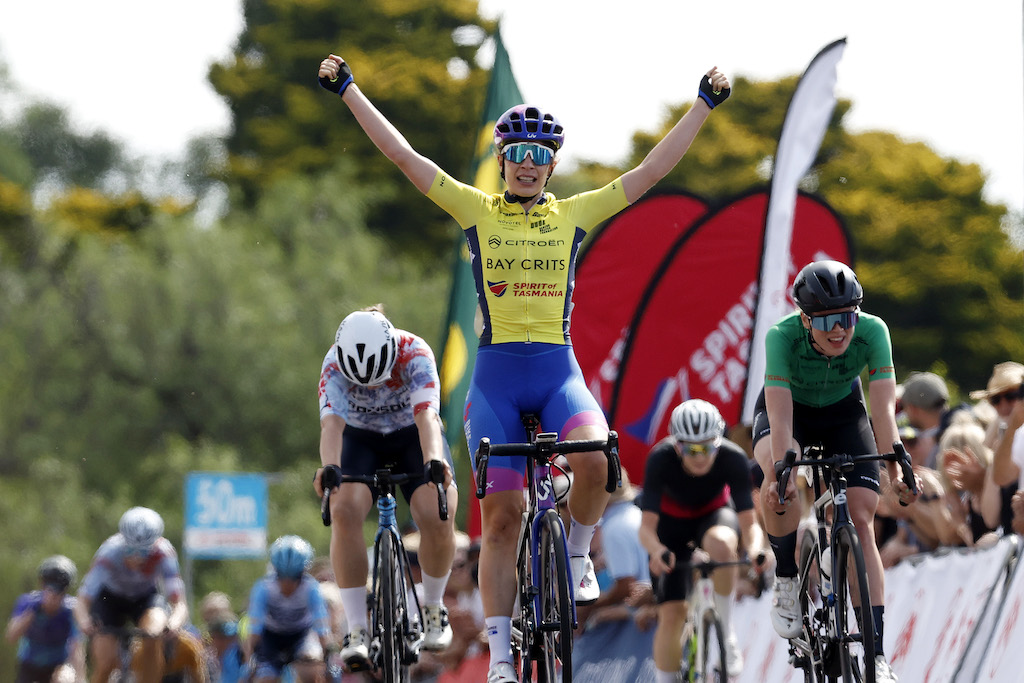 Ruby Roseman-Gannon (Bayside Citroën) took yet another victory at the the Citroën Bay Crits in Geelong, Australia, sprinting to the win on stage 2 and putting herself in a dominant position to take out the overall race for a second year running.

The defending champion had once again gone on the attack during the criterium, but when the move was reeled back in had enough left in the tank when the finish line beckoned, holding off Keely Bennett (Team Bridgelane) and Chloe Hosking (Roxsolt Liv SRAM) after the three gapped the rest of the field in the final dash to the line.

“After the way my team raced today I really wanted to finish it off for them,” said Ruby Roseman-Gannon after a cool down lap. “It was a great race, we put on a show, we tried to attack a lot and I think you saw that right until the end, with Matilda’s (Raynolds) last attack which we were hoping would stay away. I can’t thank them enough and Georgia (Baker) gave me the perfect lead out again.”

Roseman-Gannon’s second victory in as many days means the Team Jayco AlUla rider, who is competing with the Bayside Citroën composite team, now holds a dominant 24 points in the yellow jersey competition with just one more stage to go. That puts her 9 points ahead of her nearest rival, Amanda Spratt, who is riding for the Novotel Prestige Jayco composite team while giving her new Trek-Segafredo kit its first showing at the race.

It wasn’t exactly cool as the riders set out on 1.95km course on Monday afternoon for the event that is the opener to Australia’s summer of racing, but it was a far kinder temperature than the hot first day, sitting around 24°C and with a refreshing breeze blowing off the water of Corio Bay. What wasn’t kinder, though, was the course. The race was still on the 1.9km Eastern Gardens circuit, and 50 minutes plus three laps long, but this time it was run anti-clockwise, meaning that riders faced a punchy climb in the run up to the finish line.

The early laps clipped along with the field all together and compact but at just over ten minutes in Baker began to push the pace as the peloton went through the start/finish line, opening up the gaps. Still it wasn’t until nearly 20 minutes into the racing that the moves really started to roll, with Raynolds on the attack for Bayside Citroën and opening up a small gap which she maintained for 3 laps. By her second lap out the front the gap had stretched to more than 20 seconds but then the chase began, with Spratt…