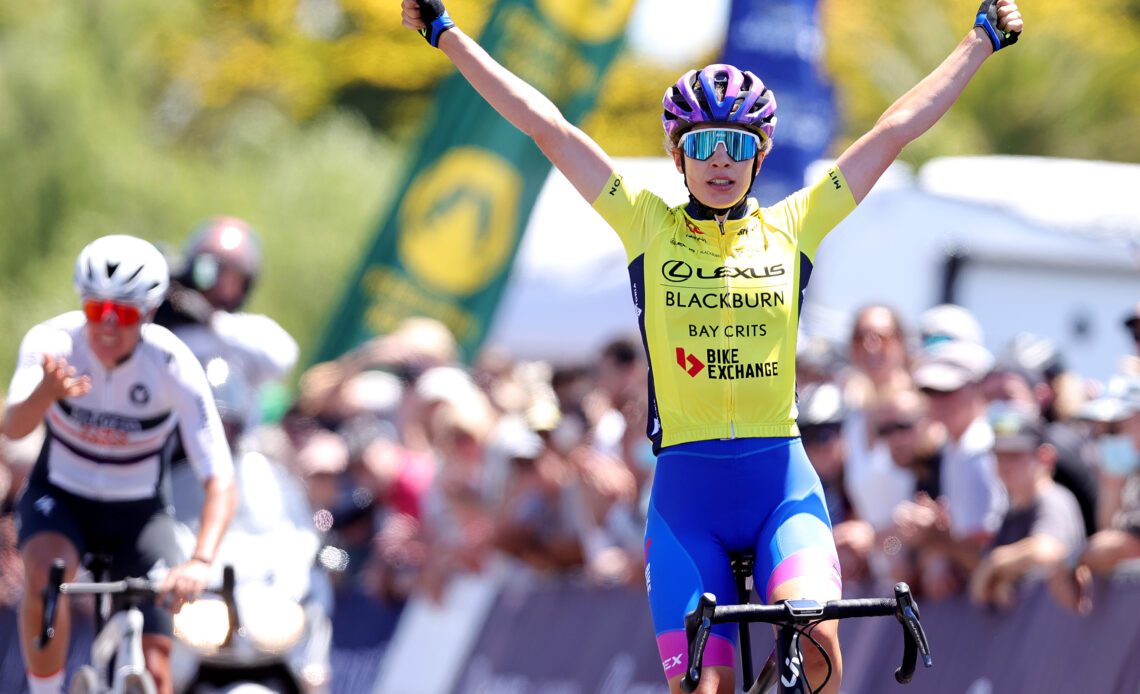 Ruby Roseman-Gannon won the first day of racing on the UCI calendar in 2023, taking out stage 1 of the Citroën Bay Crits in Geelong, Australia. She won the final sprint after racing aggressively right from the opening laps of the seafront criterium.

Lining up as defending champion at the three-race event, the 24-year-old held off former BikeExchange-Jayco teammate Amanda Spratt, who was racing for the first time in Trek Segafredo kit on Sunday, and Peta Mullens (Roxsolt Liv SRAM) who is always a ferocious opponent in a criterium.

As the winner of the 2022 edition of the race and reigning Australian criterium champion, Roseman-Gannon was closely watched but was far from the only option for the compilation Bayside Citroën team which also included the quick legs of Georgia Baker and Matilda Raynolds.

The field, a mix of Australian professionals returning from Europe and domestic riders, set off into the waterfront circuit into a hot 35°C temperature to take on the 1.92km Eastern Gardens criterium course, for 50 minutes plus three laps.

When Roseman-Gannon started the aggression early, sparking a small break of six, it looked as if the team could indeed be riding for another but regardless the field was determined not to let such a dangerous move get away.

Then 20 minutes into the racing Roseman-Gannon and Italian rider Valentina Scandolara (Novotel Prestige Jayco) broke away from the lead group. Soon Roseman-Gannon out the front alone.

A bit too early for a solo ride to victory perhaps and the field reformed. But not for long, with the defending champion’s teammate, Baker, starting the aggression again.

When she too was reeled back in it was then Elizabeth Stannard who set off for Bayside Citroën and after that it was Darcie Richards, who represented Australia at the World Gravel Championships in 2022, with ARA Skip Capital’s Lucinda Stewart jumping on her wheel for a turn out the front.

After biding her time, Spratt, who had raced with the Australian-based team now known as Team Jayco AlUla since 2012, displayed her new Trek-Segafredo kit out the front and helped pull away another move.

Once caught Chloe Hosking, who is among those riders left in the lurch this season by the collapse of the B&B Hotels team, also had a dig but the field was quick to shut it down, not wanting to let a rider of her calibre, or with her drive to win, escape.

Then after 50 minutes of racing it was Raynolds, Rachel Wales (ARA Skip Capital) and Danielle De Francesco…