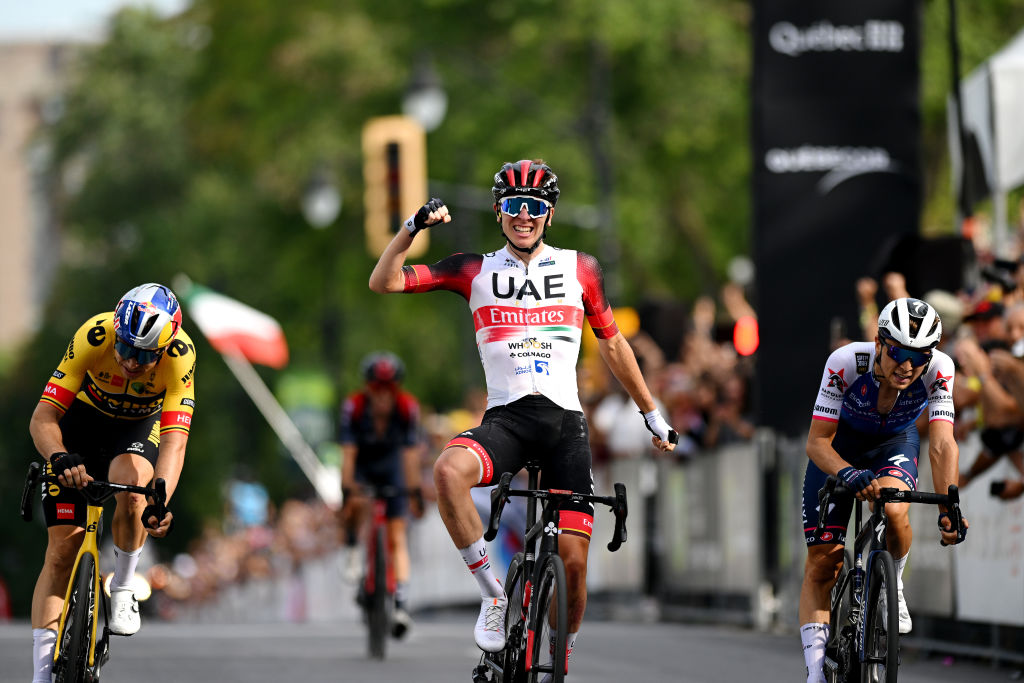 Add Tadej Pogačar’s name to the list of favourites for the UCI Road World Championships in Australia.

The UAE Team Emirates rider may have finished out of the results on his return to racing at the Bretagne Classic in France two weeks ago but bounced back to his usual level in Canada, winning the Grand Prix Cycliste de Montréal ahead of Wout van Aert (Jumbo-Visma).

The Belgian tried to match and pass Pogačar’s final uphill surge to the finish line but could only bow his head and scramble to take second place ahead of Andrea Bagioli (QuickStep-AlphaVinyl). Pogačar won by several bike lengths. He was ecstatic and suddenly looking forward to the long flight down under on Monday.

“We can go to Australia with confidence,” Pogačar said of the Worlds, nodding when it was suggested he is a favourite to win the rainbow jersey.

“We are going to Australia tomorrow. So far the shape looks like it’s coming well together. I hope for a good day in the Worlds. It’s a different course than today, it’s also a longer race and so it’s going to be really hard.”

Pogačar was especially proud to have beaten Van Aert in the uphill sprint. He threw his arms up in celebration when he hit the line and kept raising his arms as he rode back to the podium area and celebrated with different UAE Team Emirates riders. It was only Pogačar’s fourth one-day victory of his career but his palmares includes Strade Bianche, Liège-Bastogne-Liège and Il Lombardia.

“The group that we were in the final, was only the best riders in the world,” he noted.

“Wout won the green jersey at the Tour de France and has been winning every sprint this season. To beat him and all the riders who were in the front, it was incredible. When I crossed the line I was in disbelief and I was so happy.”

Pogačar and Van Aert played a mind game and tactics as they prepared for the riding sprint in the Parc du Mont-Royal.

“On the last corner he went around and waited for me to pass. But I was still pretty confident and got a bit lucky because Gaudu went early and I could follow him to get a bit of slipstream. I then pushed all the way to the line and hoped that nobody passed me. It was just an incredible finish.”

“It was not just the sprint, all the race was super hard and the team worked super good. It was perfect in the end but it was difficult because…