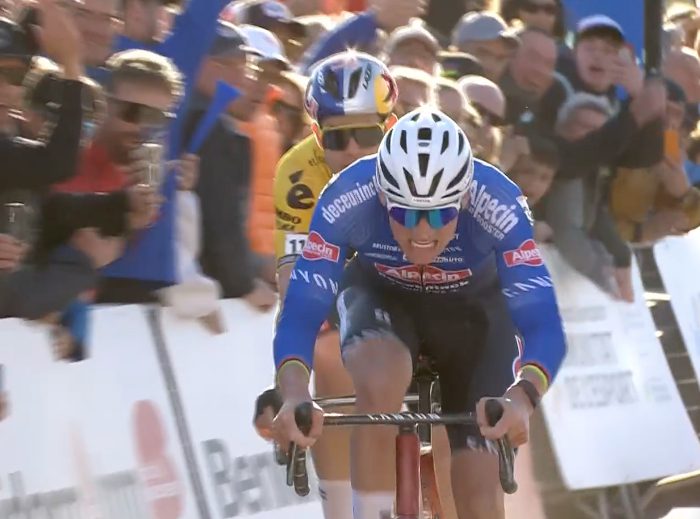 Mathieu van der Poel earned a psychological advantage over Wout Van Aert a fortnight before the Worlds by beating his great Belgian rival in Sunday’s penultimate round of the 2022-2023 World Cup in Benidorm, Spain. It was the first World Cup in Spain since Igorre in 2011. Sunday was Tom Pidcock’s last ‘cross race before heeding the call of the road and the last time the Big Three would square off in the season. Canada’s Michael van den Ham came in 33rd.

After his third place in the Zonhoven round, Laurens Sweeck held a 24-point lead over new Belgian champion Michael Vanthourenhout. Both had won two rounds, while Eli Iserbyt and Mathieu van der Poel had each earned a hat trick.

Van der Poel claimed the hole shot, while Van Aert got hung up a bit. The Dutch rider was the only rider in the string who stayed on his bike in the sand pit. Pidcock led over the line.

In the third lap a sextet consisting of the Three, Sweeck, Iserbyt and Kevin Kuhn were at the pointy end of the affair.

Again van der Poel rode through the sand on Lap 4. He tried to go solo on Lap 5 but Van Aert was adhesive.

It came down to a mano-a-mano sprint on the final lap for van der Poel to prevail.

The concluding round of the 2022-2023 World Cup is next Sunday in Besançon, France.