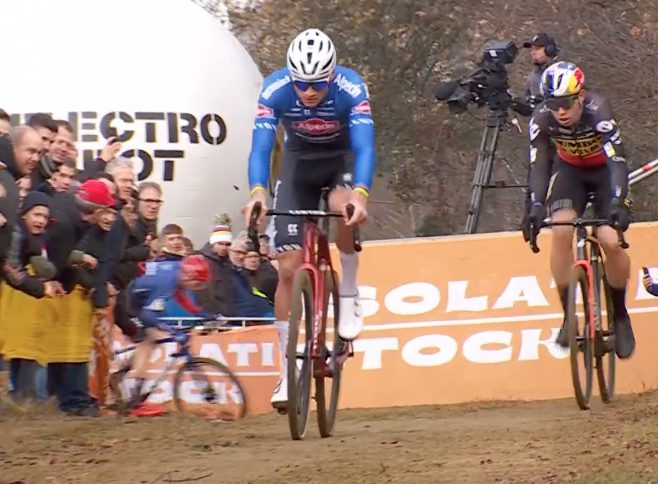 Wout Van Aert and Mathieu van der Poel played their own game in Tuesday’s fifth round of the 2022-2023 Superprestige series in Heusden-Zolder, Belgium. The duo took an early lead and fought it out in a sprint after nine laps, Van Aert prevailing after his Dutch rival pulled a foot out of the pedal. In coming third Lars van der Haar pinched the series head from Laurens Sweeck.

After four rounds, Sweeck, who also leads the World Cup, was tied on 55 points with van der Haar at the top of the table. Sweeck took the Jaarmarktcross and Merksplas rounds in November. In their last two races together, Van Aert, van der Poel and Tom Pidcock, winner of the fourth Superprestige round, made up the podium.

The string stayed long on Lap 1. Van der Poel led Van Aert at the pointy end of the race. The duo did the first lap in 7:05, the pack trailing by 19 seconds.

Pidcock was back with Michael Vanthourenhout and Sweeck in a group vying for the last place on the podium on Lap 2, 24 seconds in arrears.

On Lap 3 of 9 Pidcock led the pursuit. Lap 4 saw the great rivals carry on 41 seconds ahead, the crowd howling them on.

Into the setting sun the Belgian and Dutchman carried on their duel. Van der Haar and Pidcock dumped Vanthourenhout.

On the bell lap the fans roared the duo all the way around the course. Who would attack and where? The Dutchman tried to force the issue and pried open a couple of bike lengths. Van der Poel slid out, allowing Van Aert to join him. It would come down to a two-up sprint. Van der Poel pulled his foot out and the Belgian claimed the win. Van der Haar filled out the podium.

The next round is Wednesday in Diegem.