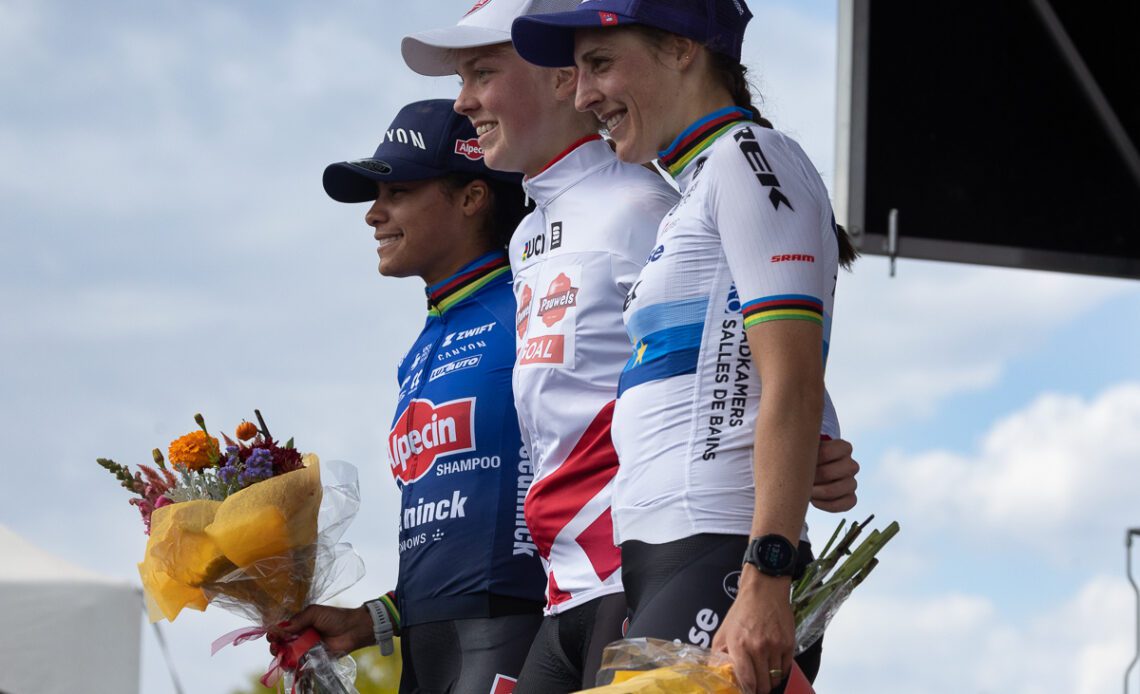 Prior to opening the 2022-2023 cyclo-cross World Cup season in the shadow of dairy farms and green rolling hills dotted with maple trees turning brilliant hues of orange and red, Fem van Empel said she hoped to be on the elite women’s podium at World Cup Waterloo.

“I hope that I’m fit enough and I’m not so tired from the jetlag,” she said.

Hopes turned to reality as the 20-year-old Dutch rider held off a pair of past cyclo-cross world champions, Ceylin del Carmen Alvarado (Alpecin-Deceuninck) and Lucinda Brand (Baloise Trek Lions), to win the elite women’s race in Wisconsin on Sunday and take the early lead in the UCI World Cup standings.

“It’s a long trip from home. Last year, it was three races [in the US] and it was worth it to come here. Just two races this year, but I am very happy to be here,” Van Empel told Cyclingnews.

“To do a trip to the USA is not normal, but for World Cups it’s mandatory to start here for some points. And yeah, a good feeling.”

It was an especially good feeling not just to race, but to score the victory in a hard-fought six-lap race.

Van Empel was part of a select group of five riders who emerged on the first lap after Brand slid out and caused a split. She drove the pace along with her teammate Denise Betsema, 777 CX teammates Inge Van der Heijden and Annemarie Worst, and Alvarado, with Brand rejoining the front on the second lap.

Then on the fourth lap, Alvarado tried to break up the party and only Brand and Van Empel were able to tag along. On the bell lap, Van Empel grabbed the front position on the descent of Factory Hill, and held off Alvarado on the pavement in a sprint, Brand settling for third place.

“Last summer was very good for me. I invest a lot in myself, and I work harder than ever before,” Van Empel said.

“I didn’t expect that I won the first two races. So yeah, that was very motivational for me,” she added about coming to Waterloo after a pair of C2 wins in Belgium in September, including Beringen, where she outsprinted Brand for the top step of the podium.

Earning the rainbow jersey in the U23 category at the Cyclo-cross World Championships in 2021, she took the bronze medal in last year in Fayetteville. Last season she announced herself with her first elite women’s victories at two World Cups, in the snow at Val di Sole in Italy and then at Flamanville in France.

Her time at Pauwels Sauzen-Bingoal will end January 1 when she moves to Jumbo-Visma for the 2023 season, and will make the change to…