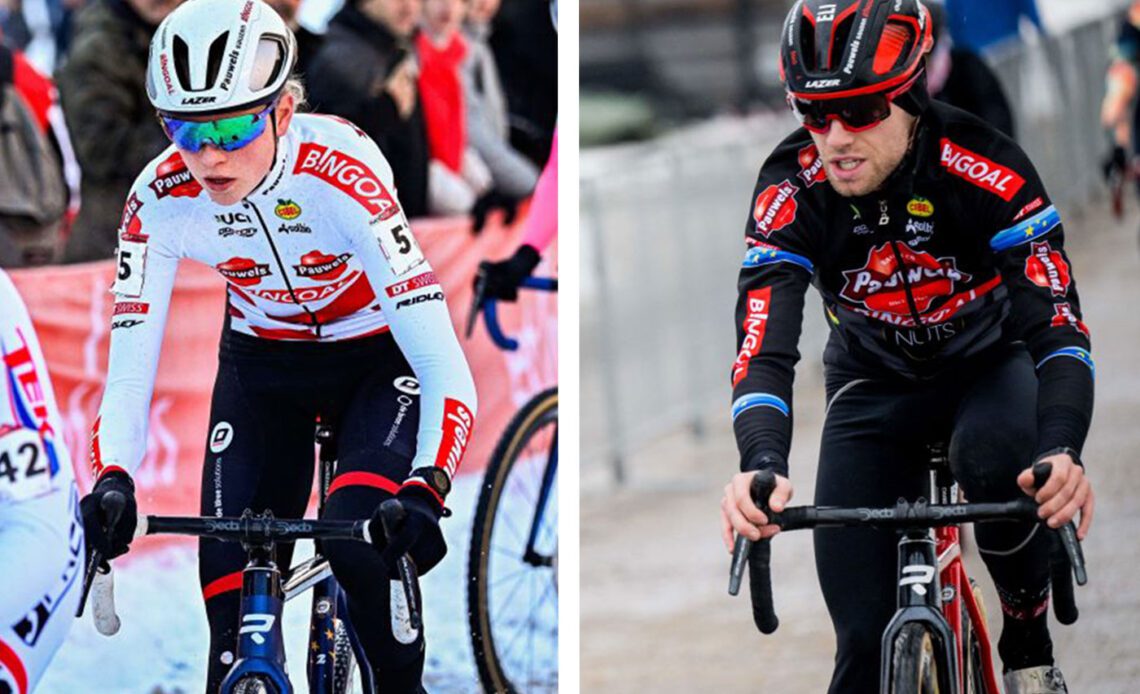 Two of the main contenders for the UCI Cyclocross World Cup series crashed out of an icy, snowy round in Val di Sole, Italy on Saturday.

The women’s series leader Fem van Empel and Pauwels Sauzen-Bingoal teammate Eli Iserbyt left the race on stretchers after crashing. However, medical examinations did not show evidence of fractures for either rider.

Last year, Van Empel claimed her first World Cup victory in Val di Sole, but this year she struggled in the icy conditions, crashing in the warm-up and fearing she would not be able to start. She took the start but she again came to grief on the second lap.

Van Empel’s crew feared she had broken her leg when she lay screaming in pain after crashing into one of the heavy wooden poles that lined the course. Medics carried her off the course on a stretcher.

The 20-year-old appears to have escaped serious injury. Medical checks did not pick up any obvious fractures, according to sports director Tom De Kort, Sporza reports.

“It was definitely scary,” De Kort said. “If a rider stays down, it’s never good. It was a serious crash and Fem was screaming in pain.

“The emergency services feared a broken leg for a while, but luckily it looks good. The doctors checked everything and gave her some painkillers. She was able to move her foot and knee and was eventually able to support herself on her leg.”

Van Empel will get a more detailed scan after she returns to the Netherlands on Sunday to rule out any fractures. “It is probably a muscle spasm where her thigh muscle was crushed between the post and her bone. That is very painful.”

Iserbyt, who won the first three World Cup rounds but lost the overall lead to Laurens Sweeck last month in Hulst, saw his hopes of regaining the series lead evaporate when he came down in a corner on lap five.

Already struggling this season with a back injury, Iserbyt now sits third with 249 points behind teammate Michael Vanthourenhout, who has 265 after winning Saturday’s round in Italy. Sweeck continues to lead with 288 points.

Pauwels Sauzen-Bingoal confirmed that medical checks also ruled out fractures for Iserbyt, but he too will get additional examinations.

🚑 Medical update: after the bad crashes in Val di Sole, luckily the first examinations on the race venue haven’t showed any fractures for both Fem van Empel and Eli Iserbyt 🍀(1/2) pic.twitter.com/A2xeFOinymDecember…