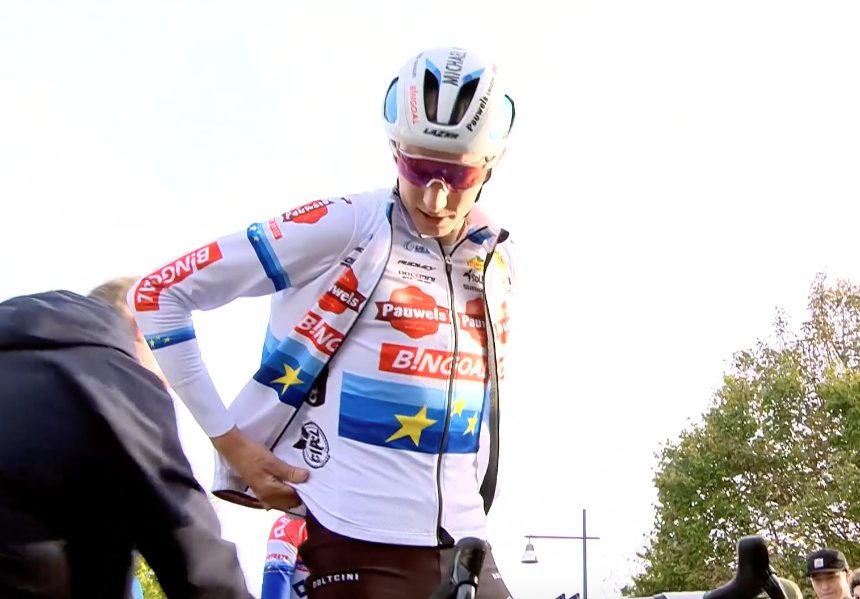 Michael Vanthourenhout earned a brace of 2022-2023 World Cup wins in Saturday’s snowy 10th round in Val di Sole, Italy. On a slippery day, Mathieu van der Poel had a tough one, coming in eighth, while three-round victor Eli Iserbyt crashed out. Fourth place Laurens Sweeck increased his series lead with four rounds to go, Vanthourenhout now closest to him at the top of the table.

Sweeck led the World Cup after two wins in nine rounds. Iserbyt, who claimed the first three races in the series, was 17 points behind. The last three rounds went to chaps who were late to the World Cup party: Mathieu van der Poel and Wout Van Aert.

After skipping Dublin, van der Poel was back in the pack, but there was no Wout Van Aert nor Tom Pidcock.

By Lap 3 Vanthourenhout, Niels Vandeputte and Kevin Kuhn were the front runners, with Eli Iserbyt just behind and Mathieu van der Poel 20 seconds back. Kuhn fell away and was soon behind Iserbyt. Van der Poel lost more time.

Vanthourenhout attacked through the finishing straight to drop Vandeputte going into Lap 4. Van der Poel fell even further off the pace.

Sweeck joined Iserbyt and Kuhn by Lap 5 of 8, the trio 15 seconds back of Niels Vandeputte. Vanthourenhout’s Pauwels Sauzen-Bingoal teammate Iserbyt fell, hurt his knee and withdrew.

Also @IserbytEli abandoned the race due to a crash.😕

We will keep you updated!🤞🏼

Kuhn got rid of Sweeck on the penultimate lap. The World Cup leader had to worry about another Swiss rider, Timon Ruegg, on his six.

Round 11 is Boxing Day in Gavere, Belgium.