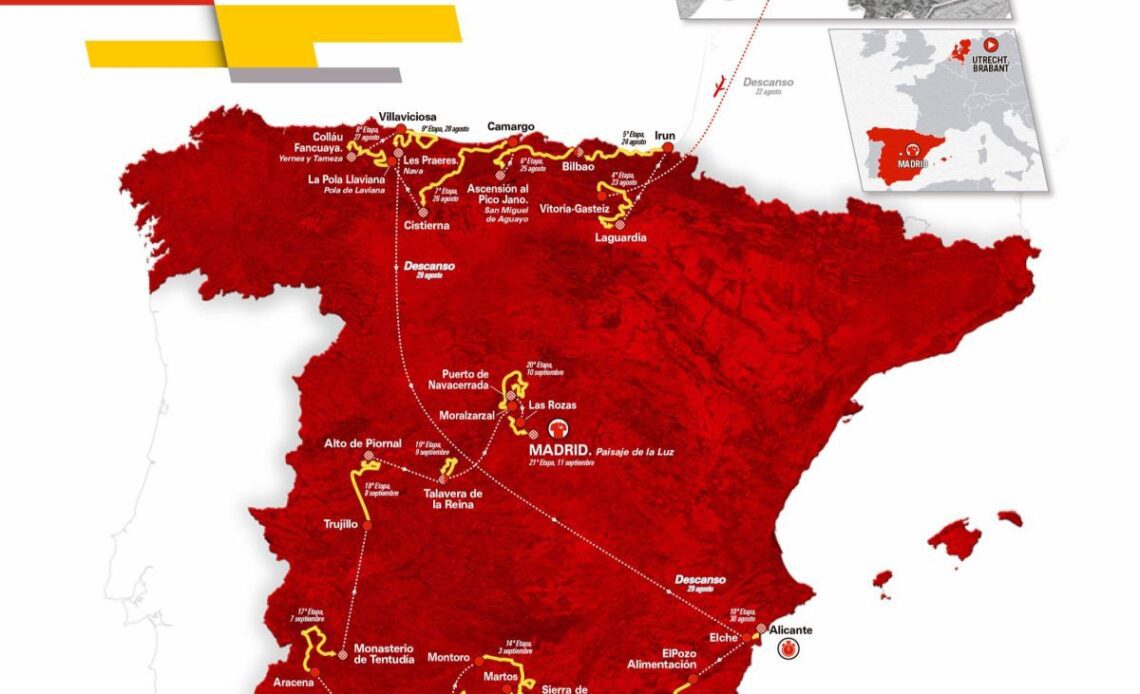 The 2022 Vuelta a España starts on August 19 in Utrecht, Holland, and ends in Madrid, Spain, on September 11. The 21 stages include a team time trial, an individual time trial, several flat stages and nine of the often-steep uphill finishes the Vuelta has become known for. You can dissect the route in more detail in our Vuelta a España preview.

Two years after the pandemic caused a postponement of the Vuelta a Espana’s Dutch start, Utrecht will finally become the first city in the world to organise the opening stage of all three Grand Tours after the Tour de France in 2015 and the Giro d’Italia in 2017.

Cycling landmarks apart, what matters most about Holland is its long (by modern standards) opening team time trial of 23km, enough to seriously shape the general classification on the opening day.

There are two further stages on Dutch soil, which are both flat and likely to culminate in bunch sprints, before the race pauses for a travel day to transfer to Spain.

The Vuelta resumes on August 23 with two medium mountain treks through the Basque Country, preceding the first uphill finish of the race at Pico Jano on stage 6. There is more of the same as the Vuelta moves across northern Spain into Asturias at the back end of a long opening week that makes up for the relatively gentle start in Holland.

Stage 7 features just one mid-race climb, but there are back-to-back summit finishes on stage 8 and stage 9, at Collado Fancuaya and the super-steep slope to Prades, respectively.

A hard and decisive second week

The first proper rest day on August 29 sees the race make the long transfer from the north coast to the south east coast.

The second week then begins with the all-important individual time trial on stage 10, a 30km route between Elche and Alicante. Pancake flat and exposed, a poor day for the climbers could create almost unbreachable distances for the second half of the race.

Stage 11 pays homage to Alejandro Valverde with a start in his home town of Murcia on a flat day before the race heads west along the south coast the climbers come back to the fore on the category-1 summit finish of Peñas Blancas on stage 12, which is notably longer and tougher than when the race last visited the southern Andalucían ascent in 2013.

Stage 13 is flat with an uphill drag to finish, but it’s another back-to-back helping of…