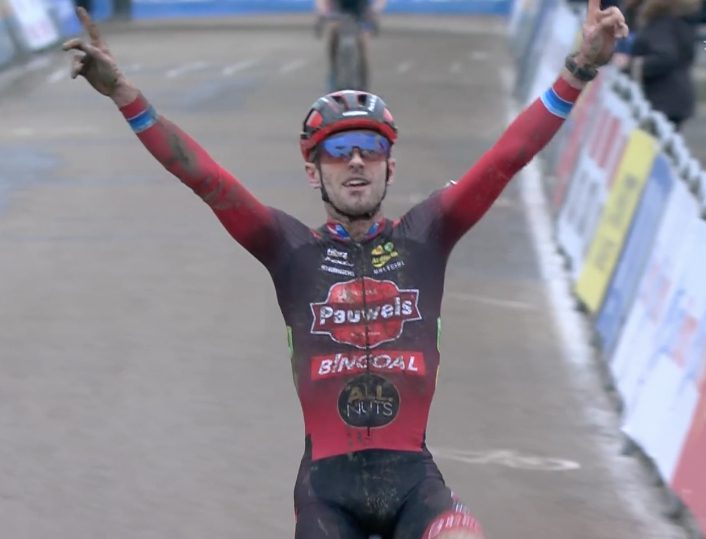 In Sunday’s third round of the X2O Badkamers Trofee, the Big Three was down to a solo act, and it was Tom Pidcock who looked like he was heading to victory at the GP Sven Nys in Baal before a final lap crash frustrated his chances. Eli Iserbyt won for the first time since October. Pidcock’s wipeout came on the same day that his coach said he won’t be defending the rainbow jersey in Hoogerheide in early February.

Round 2 victor Pidcock didn’t have to worry about his Big Three main rivals Wout Van Aert and Mathieu van der Poel on Sunday. Van Aert got the better of his rivals again on Friday, winning the Exact Cross Loenhout-Azencross two days after taking the Superprestige Diegem in a cracker of a contest with Pidcock. Van Aert beat van der Poel at the Superprestige Heusden-Zolder for the victory. Van der Poel triumphed in the last World Cup race in Gavere. The Exact Cross Mol0Zilvermeercross on December 23 finished Van Aert, van der Poel, Pidcock.

After two rounds on November 1 and 21, Eli Iserbyt led Lars van der Haar by six-seconds at the top of the table.

Cameron Jette was the lone Canadian in the elite men’s race in Baal.

On the first circuit Pidcock was with Iserbyt and Michael Vanthourenhout at the pointy end of the race. Series leader van der Haar lagged behind. Just after Iserbyt picked up the maximum bonus seconds on the second circuit, Pidcock took his leave of the Pauwels Sauzen-Bingoal duo.

Vanthourenhout kept Pidcock within reach on Lap 3. The Pauwels Sauzen boys were 10 seconds back going into the next lap.

Lap 4 of 7 Pidcock slid out, allowing the Belgians to draw closer. The Brit rose, remounted and started lapping riders.

Iserbyt left Vanthourenhout behind on Lap 5.

Pidcock’s crash into the barriers came on the downhill whoops, the world champion flinging wildly to the right. Having climbed back on the bike, he was at first able to stay with Iserbyt and Vanthourenhout, but the Brit was clearly not comfortable and Iserbyt dashed away. Iserbyt inflated his series gap over van der Haar to 1:27 with the triumph.

The fourth round of the X2O Badkamers Troffee is Tuesday in Herentals.