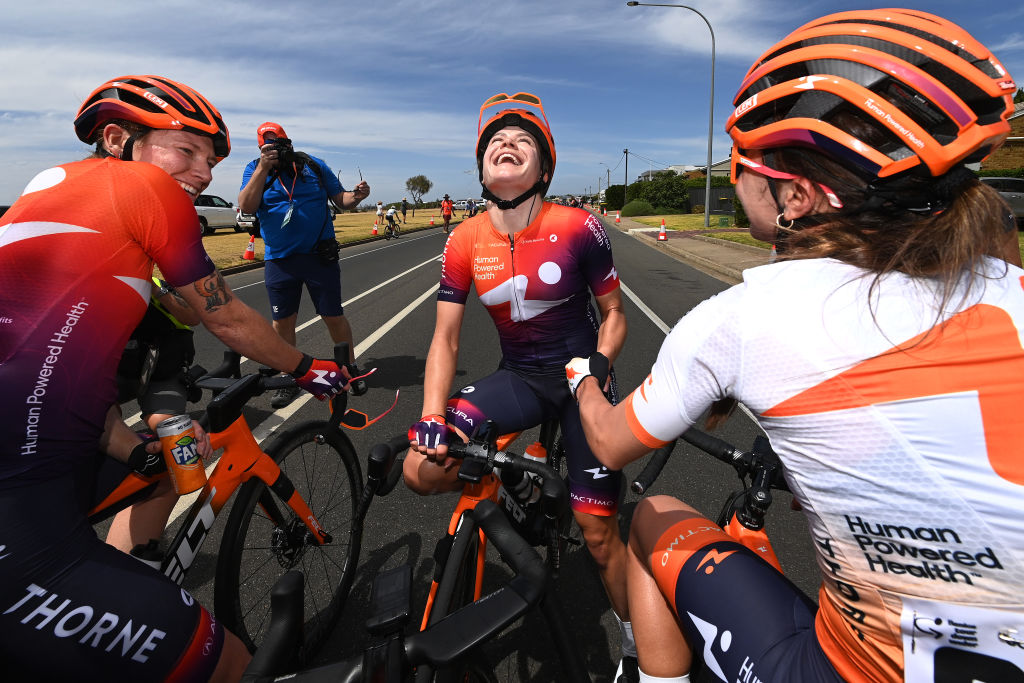 For Daria Pikulik, the month of January has been an eventful one: She started her contract with Women’s WorldTour team Human Powered Health, then celebrated her 26th birthday and travelled to Australia for the first race with her new team. Then after a 10th place in the Schwalbe Classic criterium, Pikulik sprinted to victory on stage 1 of the Women’s Tour Down Under.

In the post-race interview, Pikulik’s mind oscillated between disbelief and elation: “I can’t believe it, for me it is a dream come true. I’m just a Polish girl, now I am in the WorldTour and win this race,” she said.

Going into the race, her team saw a chance for a good result, but she didn’t expect to win.

“We know that I am a fast girl and can sprint because this is a flat stage. We could sit together in the race and do a really good job to keep me in the front in the last kilometres, and when I crossed the line, I was like, ‘oh my gosh, I won’,” Pikulik told reporters after receiving the ochre jersey on the podium.

Coming to Australia from Europe to race in a peloton composed mainly of Australians and New Zealanders who had the advantage of training in the southern hemisphere summer, Pikulik wasn’t sure of her form, but the first road stage dispelled her doubts.

“I didn’t know how I would feel because we got to Australia four days before the race, there is jetlag, and I come from the winter, in Poland it’s really cold, so the heat here is different, but in the race today I didn’t feel that anything was wrong,” Pikulik explained.

Pikulik raced well in the hectic final, joining the front group that formed in the crosswinds with 10 km to go together with her teammate Lily Williams. When that move was neutralised, Williams and Kaia Schmid kept Pikulik at the front of the race, and the Polish rider could wind up her sprint in the slipstream of FDJ-Suez’ Clara Copponi before launching off Copponi’s wheel. Pikulik took a brief glance to the line at the 100-metre mark to gauge the distance left, then put her head down to pull away, winning a bike length ahead of Copponi and Georgia Baker (Team Jayco-AlUla).

The final with echelons and corners worked to Pikulik’s advantage:

“In Poland, I live near to the sea. When I’m training, it’s windy all day, so for me it’s no problem to keep the position in the wind, to keep my balance on the bike. I like finishes like this, not just flat, but with some challenges, hectic, with corners. I am also a track…