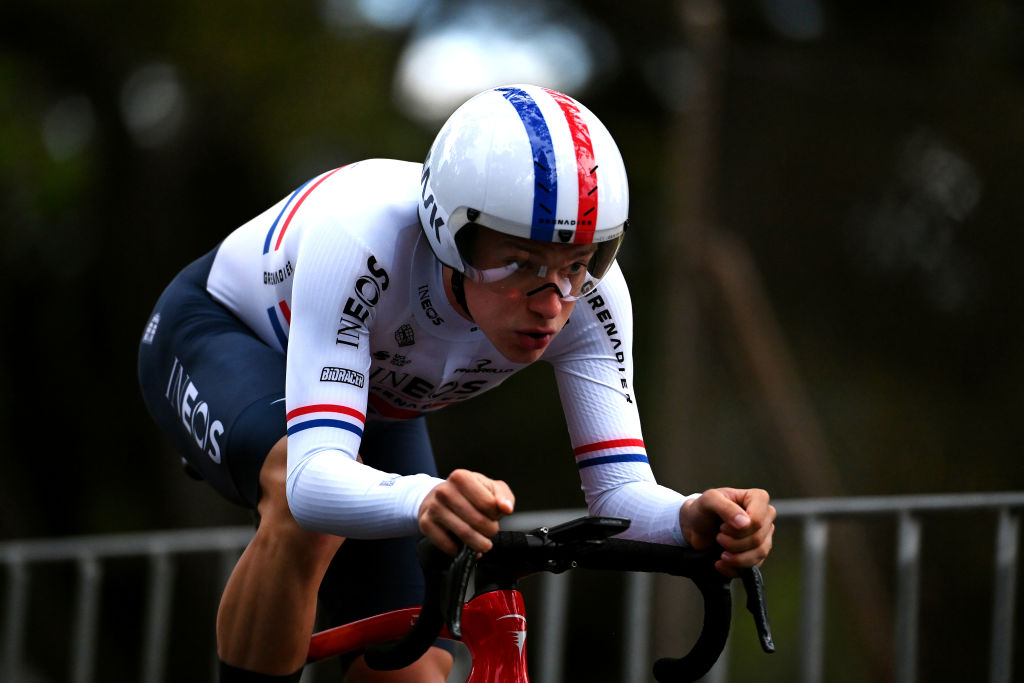 The opening prologue of the Santos Tour Down Under was far from a straightforward affair, with rain adding another layer of difficulty to the already technical 5.5km course, but Ineos Grenadiers emerged with a podium placing and two more riders within the top 25. Importantly, amongst them was the squad’s GC hope, Ethan Hayter.

The 24-year-old who won last year’s Tour de Pologne and the Tour de Romandie prologue in Lausanne was the last of the Ineos Grenadiers riders to set off. Conditions had become wet after the start, giving the ultimate winner Alberto Bettiol a considerable advantage over many of his rivals.

Hayter was the last of the Ineos Grenadiers riders on the course, setting off in drizzly conditions to finish in 21st.

However, he said, “there’s still five days of racing left so a lot to play for. It was drizzly when I sat on the chairs at the start and it was sort of damp for everybody. To be honest I had this crash in Mallorca a couple of weeks ago and I didn’t take any risks at all.”

Even then, Hayter was just 19 seconds back from Bettiol and ahead of many of his potential rivals.

“I think it is not a bad start, Magnus was second, and me and Plappy were up there,” Hayter said.

Magnus Sheffield had to cope with the damp conditions, and although the rain may have stopped as the searing heat of earlier in the day gave way to overcast conditions, there was an early warning shot to remind him to be wary.

“Even before going off the ramp my rear wheel slipped but I knew I just had to keep my eyes open and look at the corners throughout the race,” Sheffield told Cyclingnews. “I was really just trying to see through the corners – how they looked and find the dry spots.

“Mostly I found the entry of the corners were quite wet but the exits were still drying up just as I was going out on the course, but I knew I wanted to stay upright because it’s a long week but I also really wanted to go for the win.”

Staying upright, was of course, also a big consideration for the rest of the squad as they raced along the riverside in Adelaide’s central business district.

“I’m as happy as you can be in these conditions,” Luke Plapp told Cyclingnews, still breathing heavily with sweat and rain running down his face after finishing 24th at 20 seconds.” The technical aspects definitely aren’t my strongest points and in the wet, you’ve got to be a bit careful. But look I’m happy as I can be. It’s up there in these conditions.”

But being “up there’ however is not Plapp’s first…