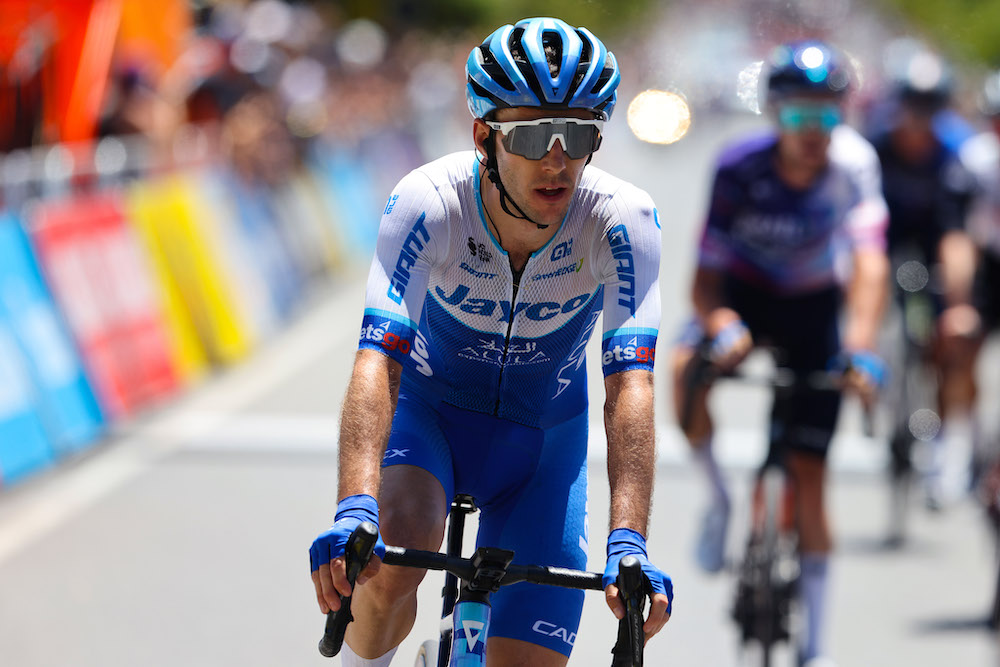 The Jayco AlUla team have promised to race aggressively right to the end of the Tour Down Under in the hope of somehow defeating Jay Vine and his UAE Team Emirates squad on Sunday’s final stage.

Led by Simon Yates, Jayco AlUla are riding on home turf at the Tour Down Under and want to win the only Australian WorldTour stage race after a two-year absence due to the global COVID-19 pandemic.

They want the haul of UCI ranking points that comes with victory and the morale that early-season success always provides.

Only one thing stands in their way: Jay Vine.

The Australian rider also wants a home win as he continues his incredible career progression in the professional ranks.

After the crosswind attacks and Bryan Coquard’s win in Willunga Township on Saturday, Vine leads Yates by 15 seconds, with Pello Bilbao (Bahrain Victorious) third, also at 15 seconds, but behind Yates due to the 100th of a second time difference from the prologue time trial.

“I’d prefer to be 15 seconds in front instead of 15 seconds behind but it is possible for us to win the Tour Down Under. We won’t be giving up until the very end,” Jayco AlUla directeur sportif Mat Hayman told Cyclingnews, setting out the team’s mentality.

“We didn’t come here to get second or third on GC. We have to go all-in and try to win it. Of course if we finish second or third, we’ll accept it. But we’ll race hard right to the end.”

Jayco AlUla were hoping Michael Matthews would lead their chances of overall victory in the Tour Down Under. He anticipated his spring peak of form and gave up his usual winter training in Europe to spend January in Australia and target the Tour Down Under.

Sadly for Matthews, he was bumped by riders during the decisive moment of stage 2 to Victor Harbor. He lost his chain and then more than two minutes to his overall rivals, ending any chance of victory.

Fortunately, Yates also travelled down under and also worked on peaking for the race. When Matthews lost time, Yates stepped up. He got away with Vine and Bilbao on stage 3 over Corkscrew Road and they distanced Rohan Dennis. Yates is now Jayco AlUla’s leader and only hope of overall victory in Australia.

“It’s disappointing what happened to Michael’s chances. We were chipping away at the bonus seconds and he was well placed to go for the win,” Hayman explained.

“We’re up against things, with the gap to Vine at 15 seconds, but Simon is strong too and a real fighter. We’ve won and lost the Tour Down…