Caleb Ewan comes up late in Tour Down Under sprint 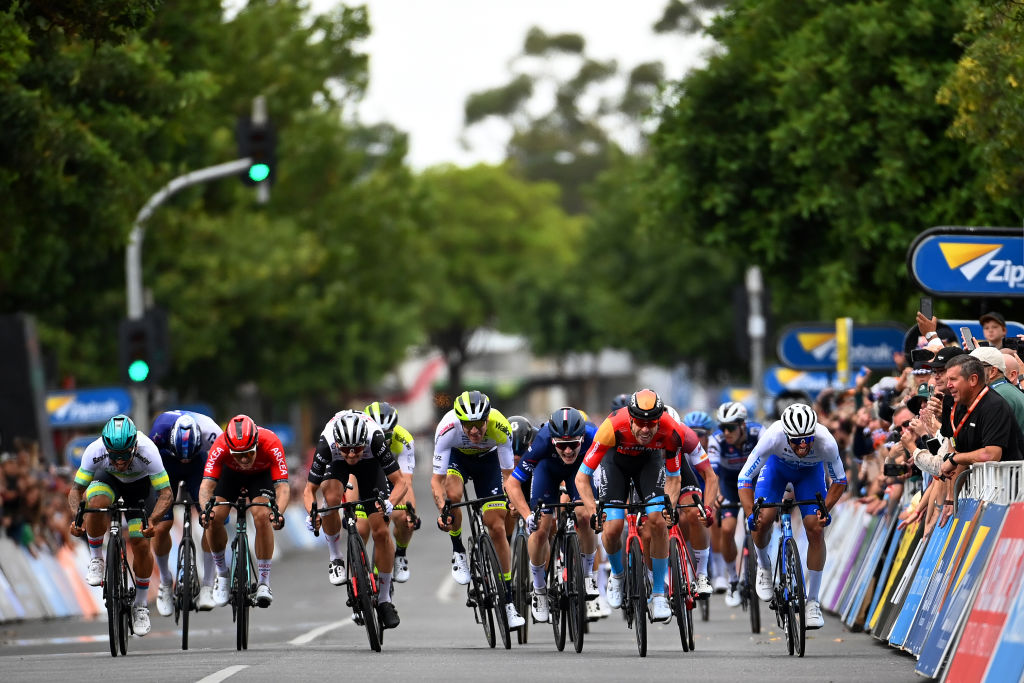 Caleb Ewan was arguably the fastest sprinter in the final one hundred metres of stage 1 of the Santos Tour Down Under but professional sprinting is about positioning as much as speed and the Australian could only finish second behind Phil Bauhaus (Bahrain Victorious) after a fight for the best wheel in the fast run-in to Tanunda.

Ewan is riding for the Australian national team instead of Lotto-Dstny at the Tour Down Under. His young teammates are doing all they can to help him but do not have WorldTour sprint experience, and on top of that the in form Graeme Frislie got caught up in a crash while Lotto-Dstny teammate Jarred Drizners suffered a late mechanical problem.

The leader of the Australian national team wisely got on Michael Matthew’s wheel after the fast descent off Menglers Hill to take on the speedy journey to the finish but cross winds squeezed the peloton to the right.

Ewan slipped back in the final kilometre, started his sprint way back yet still found a way through and came up fast.

“I was so far back…” Ewan admitted with regret.

“I wasn’t in a position to win and I’m surprised I got so close. I could only see all the guys in front of me. Then I saw Bauhaus and the line was quite close. It’s disappointing but I can’t ask for too much from the team.

Ewan is a savvy, skilled sprinter but even he needs protection and a lead out to boost his chances of victory.

“When you’re by yourself you’re really in the scrap,” he admitted.

“I was in a good position coming down the descent coming into the cross wind section but then I just got stuck. When you have no one to sit in the wind for you and you’re fighting for wheels, it’s tough, that’s why I ended up where I was, a bit back.”

The first road race stage of the 2023 Tour Down Under was largely relaxed, with the peloton happy for Nans Peters of AG2R-Citroën to spend much of the stage alone off the front.

However that meant everyone was fresh and aggressive in the final ten kilometres after climbing Menglers Hill.

The riders fought for position as the road descended and rolled through the Barossa vineyards, some forced off the road into the gravel as a crosswind further complicated the racing. Some took huge risks to move up, while one ripple in the peloton forced Jayco Alula into the gravel as they protected Matthews.

“There was a point I thought Michael Matthews was going down when the bunch switched left to right,” Ewan said.

It was pretty scary in the…