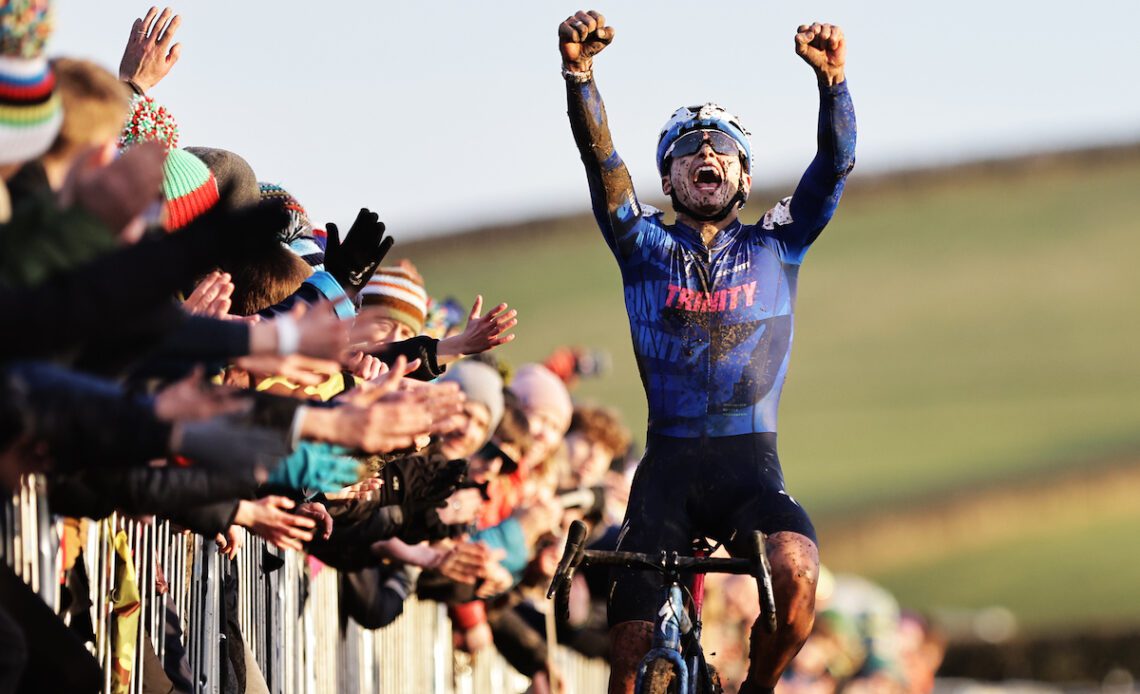 The 22-year-old was beaten by Thomas Mein after an epic battle last year but was not to be denied again riding clear of his rivals by the midway point and building a winning margin of two minutes and 34 seconds.

“Last year was quite disappointing but I did everything right today and I’m really happy,” said Mason after clinching the national crown.

“Today was my career highlight 100%. Nationals is a hard one, it’s a big week and you can be inside your own head a lot. “I’m really happy with how I managed it trying to stay as chilled as possible has really paid off. Taking the jersey to Belgium will be super important.

“I think Tom (Pidcock) showed that with the worlds jersey that having a British rider in a big jersey at the front of the race is important, so I’ll be happy to do that.”

Defending British champion Mein set the early pace on a muddy course in Cumbria as Mason recovered from a slow start.

However, once the Trinity Racing rider took the lead before the midway point he set a formidable pace distancing Joseph Blackmore in second and Mein in third.

“I had a rubbish start but it is what it is,” added Mason.

“Joe (Blackmore) and Thomas (Mein) were setting a really hard pace I just wanted to sit back a bit and let them do that.

“On this course as soon as you go over your limit and mistake you will pay for it so I was just holding back and naturally I came to the front. I got a small gap, but that’s all you really need to break them a little bit and from there it was just riding my own pace.”

Mason finished fifth in the under-23 category at last year’s cyclo-cross world championships in Fayetteville narrowly missing out on a medal in a sprint finish.

The British rider will be making his elite world championships debut next month and has ambitions of a top-10 finish.

“Worlds is my next goal, I’ll go training and then go full gas for the worlds which is my next big goal,” he added.

“With the elites, I want to make an impression there. I think a top-10 will be what is achievable but there are so many guys that can finish inside that top 10.

“It will be important to show that Great Britain jersey when Tom (Pidcock) is not there. I’ll have one more race before the worlds in Hammer (January 28).”

The 22-year-old has finished in the top 10 in both World Cup rounds he has entered this season at Gavere and Dublin.